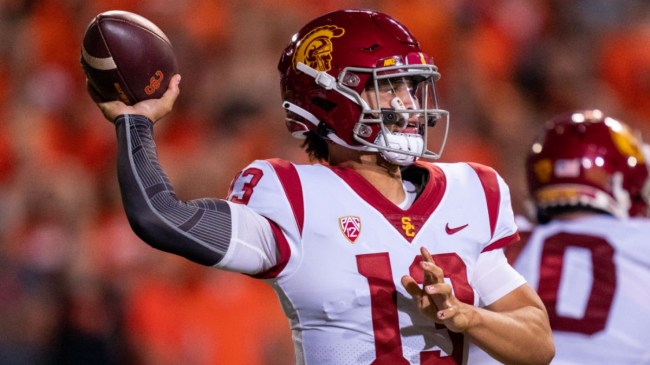 USC’s football program made some big moves this offseason to try and get themselves back into the upper echelon of college football. They brought in Lincoln Riley to coach the program. He brought Caleb Williams with him to play quarterback for the Trojans. USC brought in Jordan Addison for Williams to throw to.

The moves have proven helpful as they are currently undefeated and find themselves in the top 10 in the country for the first time since 2017.

However, it seems there is still a major gulf between USC and the absolute best programs in the country. According to Joel Klatt, the difference in talent between USC and teams like Ohio State, Alabama, and Georgia is the same as the gap between USC and Florida Atlantic.

If you actually go and you look at the 247 team composite rankings … you’ll see that Alabama and Georgia and Ohio State are the most talented teams in the country. … But did you know that they are way ahead of the rest of college football, when looking at the talent?

It’s stats like this that are why you see these teams get such huge betting lines even when they are taking on other top 25 programs and it is a gulf that was put on display by Georgia when they destroyed Oregon in Week 1.

If USC can win out, they’ll be well positioned to test themselves against those top teams in the country. Based on those numbers, it looks like we could be in store for another blowout in the College Football Playoff if USC ends up going head to head with Georgia, Ohio State, or Alabama.