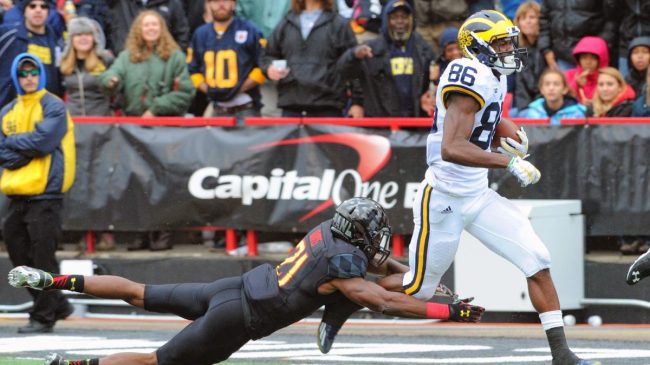 It’s been quite some time since the Maryland Terrapins football program had the level of excitement around it that it has right now.

The Terrapins have just two winning seasons since joining the Big Ten in 2014 and each time they won just seven games. But this year could be different. Mike Locksley’s group is 3-0 on the young seasons and boasts an impressive offense led by quarterback Taulia Tagovailoa.

Maryland’s first real test of the year, however, came Saturday when it traveled to Ann Arbor to take on fourth-ranked Michigan in The Big House. Unfortunately for Terps fans, their start was…less than ideal.

The host Wolverines won the opening coin toss and opted to defer their option to the second half. That meant Maryland took the ball first and sophomore wideout Tai Felton went back to receive.

What happened next was, well, unfortunate.

Some audio sound effect options for the ball that went off the Maryland player's head. Vote in the comments.

The ball doinked off of Felton’s facemask and into the hands of the waiting Wolverines. One play later, Michigan took a 6-0 lead.

3 seconds in and Michigan is on the board 🔥

Fans wasted no time laughing at the Terrapins’ misfortune.

And the hits just kept coming.

Not great, Terps. Not great.