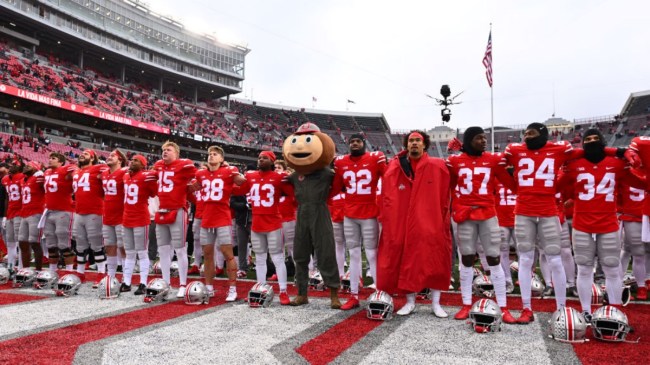 With just a couple of weeks left in the college football regular season, the weekly College Football Playoff rankings are becoming more and more important.

On Monday, the committee released their 3rd set of rankings and despite plenty of big results around the college football world this past week, there weren’t any major changes.

Unfortunately for Michigan fans, that means their team is still stuck behind Ohio State in the rankings.

On the surface the teams appear to have pretty similar resumes. Both teams head into this weekend holding 10-0 records. Both teams have beaten up on Big 10 competition on their way to their perfect records. Both are viewed as being among the most balanced teams in the country.

However, The Columbus Dispatch’s Bill Rabinowitz has revealed that there is one big factor keeping Ohio State ahead of Michigan. According to Rabinowitz, College Football Playoff chairman Boo Corrigan said it was because of Ohio State’s win over Notre Dame.

The win over Notre Dame certainly hasn’t been the resume builder it was expected to be, with the Fighting Irish dropping games against Marshall and Stanford this year, but it looks quite a bit better than the can crushing Michigan did during their non-conference schedule.

While UCONN has been a pleasant surprise since their loss to Michigan, earning bowl eligibly over the weekend, they definitely aren’t as strong of a win as ND. Their other 2 non-conference wins were against Hawaii Colorado State, who are among the worst teams in the country.

Luckily for both of these teams, the debate between who should be ranked higher will become pretty meaningless in just over a week. The 2 teams play each other during rivalry and the winner will secure a spot in the Big 10 Championship Game and likely a College Football Playoff spot.

Unfortunately for Michigan, if they can’t win that matchup against the Buckeyes, that weak non-conference schedule could come back to haunt them as they try to make their case for a spot in the Playoff.