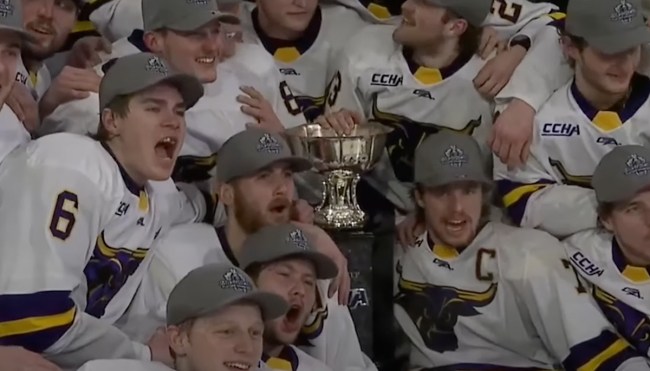 Virtually anyone who grew up playing sports had dreams of stepping up and becoming the hero with a big game on the line; I have a feeling I’m far from the only kid who spent afternoons fantasizing about drilling a game-winning basket or hitting a walk-off home run and practicing the celebration that would ensue if I ever got the chance to live it out in real life.

Over the weekend, Minnesota State forward Josh Groll got the chance to do exactly that when he netted the game-winning goal against Bemidji State in the Central Collegiate Hockey Association championship game to earn the Mavericks the right to hoist the Mason Cup.

According to The Athletic, Minnesota State had already headed to the locker room to celebrate the victory after the trophy presentation when the refs did their best Lee Corso impression by hitting both teams with a “Not so fast, my friends!”

After taking a closer look at the video, officials ruled the puck hadn’t crossed the goal line but rather snuck in underneath the net that was dislodged when Bemidji State’s goaltender attempted to make the save. As a result, both teams were ordered out of the locker room and given a few minutes to warm up before overtime resumed.

This wild series of events was initially brought to my attention by the one and only Jomboy, who gave the bizarre saga his signature treatment.

Thankfully, it all worked out in the end, as Jack McNeely was eventually able to tally the actual game-winning goal (and one that left no room for debate).