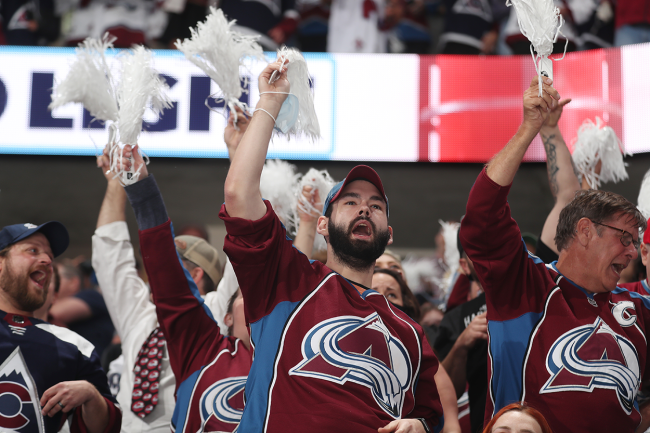 The Avalanche had themselves a night against the Canucks on Thursday. Colorado demolished Vancouver 7-1, led the entire way, and never took the foot off of the gas.

It was complete and utter dominance from start to finish. However, despite the seven goals on the ice, the highlight came from the crowd.

Canucks social media coordinator Jessica Corbett, who had a bad night as he team got smashed, was able to find joy in one moment. Early in the third period, Blink-182 began to play over the loud speakers.

Every single fan in attendance went berserk and sang along to ‘All The Small Things.’ It got even more amazing when the audio cut off but the crowd kept going.

Watch this video and try not to sing along with a big smile on your face. It’s impossible.

The arena just collectively sang All The Small Things by Blink-182 and it’s been my only shred of happiness tonight🙂 pic.twitter.com/qUgxTI3l3t

Interestingly enough, this is not the first time that this has happened in Denver. Apparently, whomever is in charge of the in-arena playlist, loves some early 2000s grunge rock.

It fits the hockey environment well and who doesn’t know every word?

Back in May, the same thing happened during the playoffs. When the audio cut out before the game came to a close, the Avalanche faithful kept it rolling.

Everything about these two instances are awesome. Shoutout to the people in Colorado who stayed through the blowout and allowed us to share this glorious punk moment together. They said… SAY IT AIN’T SO, I WILL NOT GO… literally.