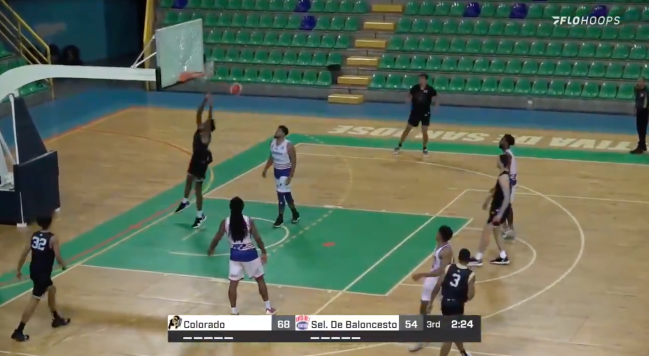 There are very few things in basketball that are cooler than a backboard-shattering dunk. Unless you miss the dunk, that is.

Then it is super lame.

While there is undeniably a frustrating element to having a basketball hoop completely shatter into a million pieces, if the dunk is cool enough, it gets a pass. Take Jerome Lane’s thunderous one-handed poster for example— though there are many.

The powerful jam was absolutely vicious and sent the crowd into a frenzy. Broadcaster Bill Raftery added one of the best calls in history to the play and it quickly became one of the most famous dunks in basketball.

That was not the case for University of Colorado forward Jabari Walker.

The Buffaloes traveled to Costa Rica for a series of exhibition games last week and the third of four matchups had to be cut short on Sunday. At the 2:24 mark of the third quarter, Walker got out in front of the defense and ended the game.

With guard Luke O’Brien pushing up the floor, Walker trailed to his left. O’Brien stopped at the free throw line and dished off to Walker.

Walker shuffled, jumped off the wrong foot and went up to jam it home. He emphatically tried to lay down the hammer and brought the backboard down to the hardwood with him instead.

Walker successfully shattered the backboard, but the ball popped out and he missed the dunk. Colorado, for some reason, posted the highlight as if it was SportsCenter Top-10 worthy.

It is not. Backboard-shattering dunks are only cool when the go in. In fact, because Walker traveled and missed, it might be SportsCenter NOT Top-10 worth.

The school even posted an alternative angle of the clear traveling violation and the miss.

Gonna need another look at that one 👀@jabari521 pic.twitter.com/JloJhvScAz

It also posted a picture of Walker with the backboard as if it was cool. Do people not understand that he missed?!

Hopefully the Colorado’s athletic department will help cover the cost to replace the backboard at Banco Nacional Arena in San Jose because Walker’s failed attempt is a tough look. Fortunately, he has a good sense of humor and laughed about the dunk.

Without an easily-accessible backboard replacement, the game was called with nearly 15 minutes left to play. Walker ended the game with a travel, a miss and a mess.