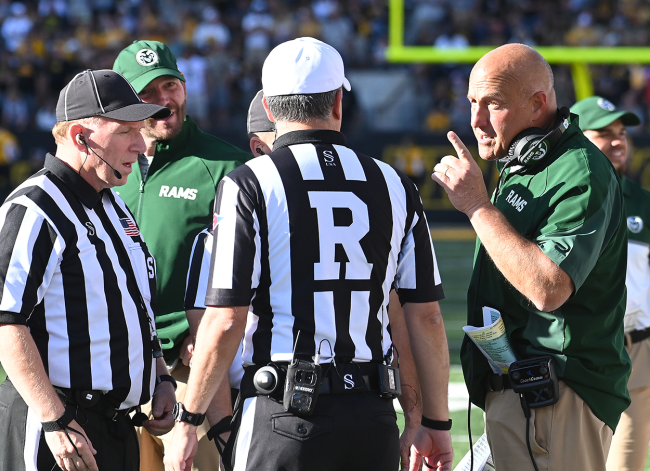 There is a very legitimate possibility that Steve Addazio’s final moment at Colorado State was being ejected. The 62-year-old coach made history on Saturday night after getting tossed in the first half.

During Saturday’s game against Nevada, Addazio was ejected late in the second quarter.

Colorado State head coach Steve Addazio ejected while the Rams are down 31-0 at home to Nevada in the second quarter. pic.twitter.com/F1MB3Sgzp0

Addazio has been thrown out twice in his career. Both times came after two unsportsmanlike conduct penalties.

His removal from the game on Saturday also made history. He became only the second coach to get ejected twice in such a manner.

Steve Addazio is the second FBS coach to be ejected under the new 2-strikes-and-you're out rule this season. The first was Bowling Green's Scot Loeffler.

Loeffler is in Daz's coaching tree, most recently having worked under Daz at BC ('16-18).#CSURams #ProudToBe #NCAA

To make things even funnier, it happened with just under five minutes left in the first half— while down by 28.

so Steve Addazio just got EJECTED in the FIRST HALF pic.twitter.com/ZCNB3poi6b

Addazio’s warranted his first unsportsmanlike penalty after a big pass was called back for having an ineligible man downfield. An objective call.

The second penalty came during a commercial break following a turnover.

With Adazzio’s price tag, he could presumably get another year. However, Saturday’s incident could foreseeably be the final straw.