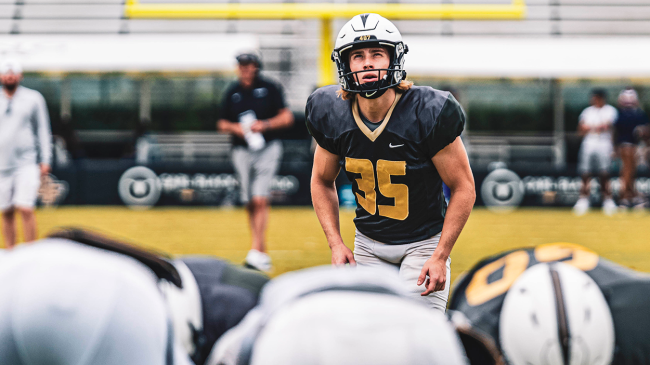 With a name like Colton Boomer, UCF’s five-star freshman was always destined to be a kicker. He has a serious leg and a serious sense of humor.

Boomer, who joined the Knights’ special teams room as an early enrollee for spring practice, and will compete with a senior for the starting job this fall. Prior to beginning his college career, he averaged 53.3 yards per kickoff with a long of 70 during his senior year at Lake Mary High School.

Beyond kickoffs, Boomer made 15-of-24 field goal attempts in his three years on the varsity level and 102-of-107 extra point attempts. He is the fifteenth-ranked kicker in his class according to Kornblue Kicking and is also the fifth-best punter.

Here’s a FG from 40 at the @CC_All_Stars tonight. Was an honor to play and represent LM with my teammates. 📸: @kickerMarkLewis @UCF_Football @KornblueKicking pic.twitter.com/JqdJamb8KK

He is a literal boomer.

Special teams players are always some of the biggest characters on a football field and they are usually the funniest guys on the team. That is no exception for Boomer. With his signature blonde hair flowing to his shoulders, he is always up to something and always having fun while doing it.

As a result, despite being on campus for just one semester, he is already a fan favorite.

It was a great day at the @UCF_Football Spring Game! Colton Bryant got to meet his new favorite player @_coltonboomer ! pic.twitter.com/HMY9IS1G5I

Boomer chose to graduate high school early and enroll at UCF so that he could try and win the starting job. He is still technically supposed to be a second-semester senior, which comes with all of the standard sendoff rituals, including the yearbook.

With the yearbook comes a senior quote and Colton Boomer’s yearbook will go down in history. It’s hilarious.

Whether the quotes go through an approval process or not, Boomer is a legend for getting it in ink!