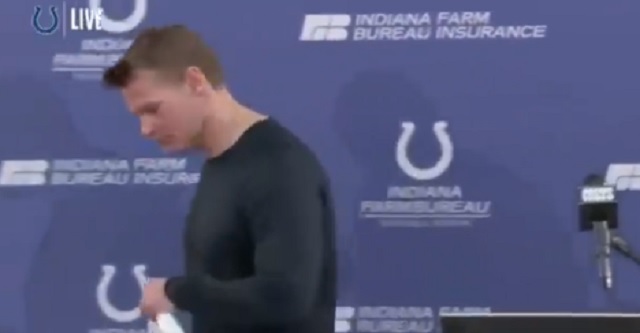 It’s been a rough 24 hours for the Indianapolis Colts. At around this time yesterday they believed they had a new head coach when they hired Josh McDaniels, but unfortunately for them McDaniels had a last minute change of heart and the team is back to square one. Today, Colts GM Chris Ballard spoke to the media about McDaniels’ decision and declared war with the Patriots when he said the “rivalry is back on’ before abruptly walking off stage.

There was no persuasion,” the GM said. “Let me make this clear: I want, and we want as an organization, a head coach that wants to be all-in.” He later added: “I live in a black and white world. Either you’re in or you’re out. I didn’t want the explanation.”

Chris Ballard punctuated his impromptu news conference Wednesday morning with the message to the New England Patriots. “The rivalry,” the Indianapolis Colts general manager declared, “is back on.”

Yooooooo Chris Ballard said “the rivalry is back on” before walking out of his press conference. pic.twitter.com/yR1TsX393m

The Patriots and the Colts haven’t been much of a rivalry since Peyton Manning left the team. Of course the Internet had plenty of jokes about Ballard’s declaration.

“The rivalry is back on.” – Colts GM 😂 pic.twitter.com/iyljzOy4Fr

“The (Patriots Colts) rivalry is back on.” pic.twitter.com/yPCztLkk0d

Ballard did great in that press conference. Clearly not happy and yet took the high road. Ballard leaving saying, "the rivalry is back on" was great! Colts are in good hands! pic.twitter.com/hrzlQJZklR

“The rivalry is back on.” – Washington Generals