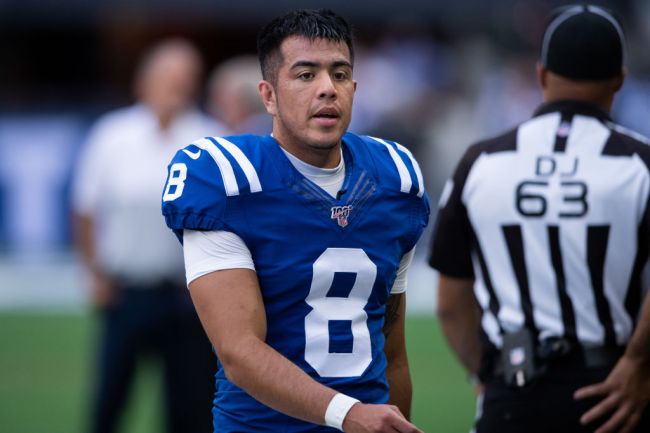 Indianapolis Colts punter Rigoberto Sanchez announced via his Instagram on Monday that he will miss an unspecified amount of time from the field to have a cancerous tumor removed. Sanchez made the announcement one day after suiting up and punting during the Colts’ 45-26 loss to the Titans on Sunday.

“Like I said before, it’s always God’s plan and it will always be bigger than my plans,” he wrote on Instagram. ” So grateful to be surrounded by doctors that helped me catch the cancerous tumor before it spread all over my body. I will be getting surgery on Tuesday and I know that it will not be an easy bump on the road, but I know I have my amazing wife supporting me along with family, coaches, and friends reaching out.

Unfortunately, there are things you can’t control in life and this is one of them. No plans or preparation would have gotten me ready for this kind of adversity, but like I told my wife, we can’t flinch. Keep striving to come back stronger than ever.”

Sanchez usually handles both the punting and kickoff duties for the Colts, but during Sunday’s loss to Tennessee, he only punted. This raised a few questions among media and fans, but now the answer as to why is pretty clear.

Colts coach Frank Reich spoke about Sanchez and his health following the game.

“Rigo is dealing with a physical issue that we have to get further evaluated,” Reich said Sunday, according to ESPN. “I give Rigo a lot of credit for the way he punted (Sunday) and for really coming through for us when we needed him the way that he did. Then Rod, when Rigo wasn’t able to kickoff, Rod stepped in there and did a great job.”

Sanchez is averaging 47.2 yards a punt and has landed 15 punts inside the 20-yard line this season. Indy signed him as an undrafted free agent out of Hawaii in 2017.