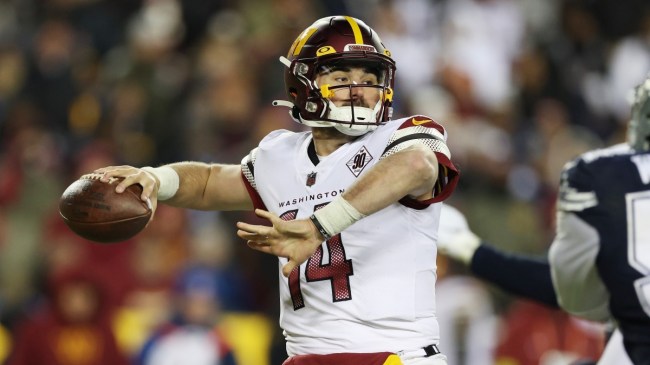 The quarterback position has been a problem for the Washington Commanders for a long time. It seems like forever ago when they had a stable situation at the sport’s most important position.

Of course, recently, their best hope was Robert Griffin III. The 2nd overall pick in the 2012 draft looked like a future star in his rookie season, only to be hampered by injuries that ruined his confidence.

This year was no different. The team foolishly acquired Carson Wentz for the Colts to supplant journeyman Taylor Heinecke. Both would play at times this year due to injuries and poor performance. Combined, they threw for 23 touchdowns and 15 interceptions, far from competent.

The missing piece to the equation was rookie Sam Howell. Howell was a star at UNC, and after his sophomore season in 2020 was considered to be a first-round lock for the 2022 draft. But, his stock slipped during his junior season, and he dropped to the fifth round, where the Commanders picked him 144th overall.

With the team having been eliminated in week 17’s 24-10 loss to the Cleveland Browns, head coach Ron Rivera decided to go to Howell for their week 18 game against the Dallas Cowboys. And, Commanders fans liked what they saw.

In a game that could’ve meant a division title for the Cowboys and meant nothing for Washington, it was very encouraging to Commander fans that the team played well with Howell leading the charge. He was an efficient 11/19 for 169 yards with one touchdown and one interception.

He made some highlight reel plays, too.

This is a high, high quality throw from Sam Howell. Wow pic.twitter.com/5XPdaFYsIX

And, Commanders fans are thrilled that they may have found their quarterback.

Me on Fanatics looking for a Sam Howell jersey #HTTC pic.twitter.com/f4NE1AJV7m

If you are telling me right now we can either start Sam Howell on a rookie deal or pay Derrick Carr 40 mil or Jimmy G 25-30 mil I’m taking Howell all day with his potential and on a cheap rookie deal where you can use that money you save for OL, LB, & CB.

I’m very CURIOUS to see what a Full Off-season of being named “The Guy”, OTA’s, Mini Camp, & Training Camp , what Sam Howell would look like .

Kid is 22 , has a ROCKET, Is a dual threat and decisive with the Ball .

We should see what 14 can do

Let’s hope for their sake that Sam Howell is the answer.