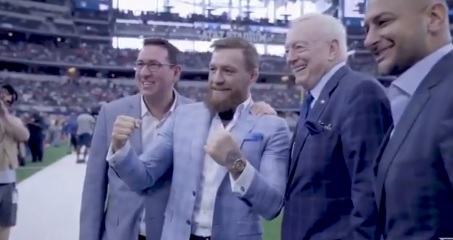 “We had a couple of texts back and forward. So, after the fight he went home. I went home as well. We were in separate houses. So I was there with Artem, Pete and Orlagh. We just stayed up Saturday night, chatting.

For whatever reason McGregor came out from hiding to give the Dallas Cowboys a quick pre-game speech on the field before their game against the Jaguars on Sunday.

The Internet was not kind to McGregor.

Much like McGregor, the Dallas Cowboys franchise make a lot of money as they continue to lose.

Why is Conor McGregor in the Cowboys huddle…didnt you just get your ass beat the other day. Dont rub that shit off on us…

WE WANT WINNERS AND A WINNING CULTURE. pic.twitter.com/jtZvMlmdi1