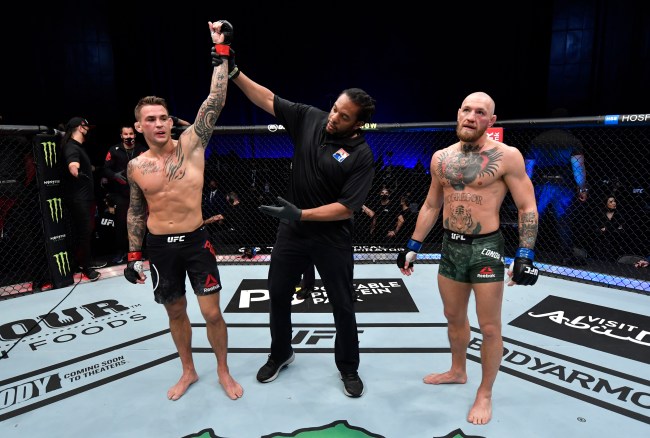 The Dustin Poirier-Conor McGregor fight is apparently off after McGregor was called out for flaking out on a charity donation.

On Sunday night, Poirier accused McGregor of ghosting him after he asked McGregor’s team about the $500k donation the Irishman had promised to make towards his charity before their fight back in January.

We thanked him because his team reached out fight week to initiate the process but ghosted us the past 2 months after the fight. My foundation has reached out 3 times since with no reply. We've moved past it! We will be announcing our next goal soon! Its a big one🙏 https://t.co/mtiOFBsd2q

McGregor responded to Poirier’s allegations by saying that he and his team were waiting for the plans on how the money was going to be used by the charity.

Poirier continued to claim that McGregor’s team refused to respond to his emails for months after the donation promise.

McGregor now says he’s not interested in fighting Poirier due to the allegations made against him.

You’re ripped you inbred hillbilly. Why do you wink with your ears? You fucking brain dead hillbilly. 500k with no plan in place. Ye hang tight. Fool. You must be new to money. The fight is off btw. I’m going to fight someone else on the 10th. Good luck on your old contract kid.

This all feels like a publicity stunt to but we’ll have to wait and see if McGregor is actually being serious about pulling out of his fight with Poirier.