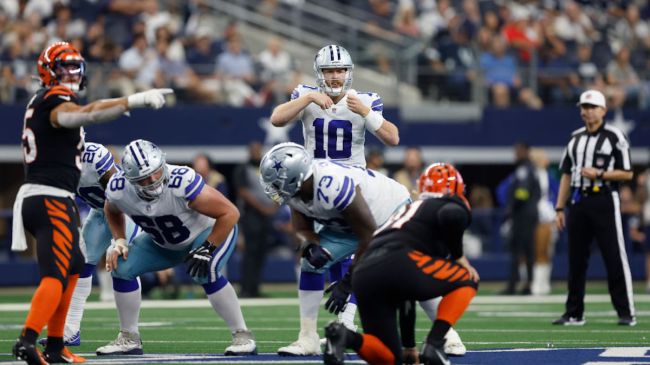 After looking offensively anemic against the Tampa Bay Buccaneers in their first game of the season, the Dallas Cowboys put on a far better offensive performance in Week 2 against the Cincinnati Bengals, the defending AFC champions.

Led by backup quarterback Cooper Rush, the Cowboys put up 20 points and capped off the ball game with a game-winning field goal.

Following the performance of Rush, some NFL fans — jokingly or otherwise — began wondering if perhaps the Cowboys are better with Cooper Rush than they are with franchise QB Dak Prescott.

The Cowboys being better with Cooper Rush would actually be funnier than them just being bad. Jerry Jones would be a in a total mental and emotional prison.

The Ewing Theory Committee just flew to Dallas for the second half to monitor this developing Cooper Rush/Dak Prescott situation.

We will have to spend the next week listening to “Is Cooper Rush better than Dak Prescott” takes. It will be tough but we can get through this together.

Why is Cooper Rush better than Dak Prescott

While original reports indicated that Prescott could be out 6-8 weeks with a broken thumb, further opinions following surgery suggested he could miss about a month instead.

In just his second career start (Rush previously started in a win over the Minnesota Vikings last season), the 28-year-old Central Michigan University product completed 21 of 33 passes for 244 yards and one touchdown.

Given the amount of money that the Cowboys are paying Prescott, though — the 29-year-old is currently in the midst of a four-year, $160 million deal — it’s unlikely Rush suplants Prescott as the team’s starter when he’s healthy. Then again, stranger things have happened. Just ask Tony Romo, who lost his job to a rookie from Mississippi State once upon a time.