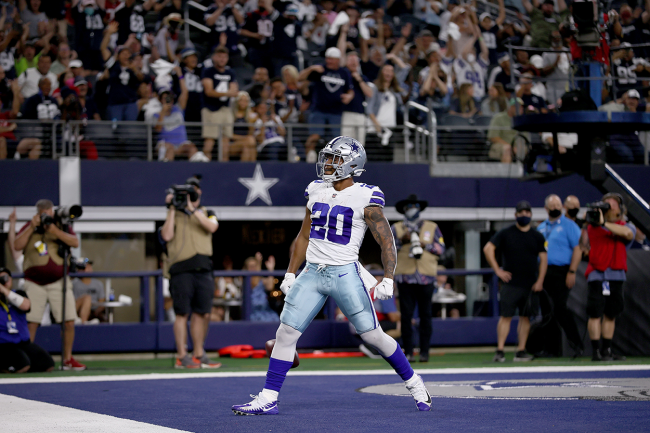 The Cowboys are finding an innovative way to get its best players the ball on offense in 2022. A new report about Dallas’ plans for its backfield has raised eyebrows across the NFL.

Over the course of the past few seasons, running back Tony Pollard has quickly become a major factor in the team’s offensive success. However, despite averaging 5.5 yards-per-carry, the bulk of carries have remained with Ezekiel Elliott.

The former No. 4 overall pick out of Ohio State had a disappointing end to 2021 while dealing with a knee injury and still has five years remaining on his expensive contract. Thus, the Cowboys hope that he will have a bounce-back year this fall.

In turn, they have to figure out how to balance Elliott’s workload while also getting Pollard his earned share of touches. And to do so, they are giving Pollard a new role.

According to Clarence E. Hill Jr. of the Fort Worth Star-Telegram, Dallas plans to use Pollard a lot more in the passing game. That is a position for which he is not unfamiliar.

As a former three-star recruit, Pollard committed to play for Memphis as a wide receiver out of high school. He continued in that role with the Tigers, while also returning kicks, until his redshirt sophomore season when he transitioned into a hybrid role.

Upon being drafted into the NFL in 2019, Pollard was in the running back room. That didn’t stop him from catching a lot of passes out of the backfield, but he was a running back.

Pollard will also play receiver with the Cowboys this year and is working at two positions in practice. His hybrid role is a lot like it was in college.

“I’m open to anything just being on the field, being able to make the most of my opportunities,” Pollard said. “If I have to line up in the slot a little more, whatever it takes, I’m ready to do it.”

Amari Cooper is no longer with the team after being traded to the Browns and Michael Gallup will be out for at least a few weeks while working back from a torn ACL. That leaves the wide receiver room in Dallas rather thing, and Pollard could be a big boost in his new role. It will be interesting to see what offensive coordinator Kellen Moore dials-up for the 25-year-old, who is coming off of a career season in all categories.