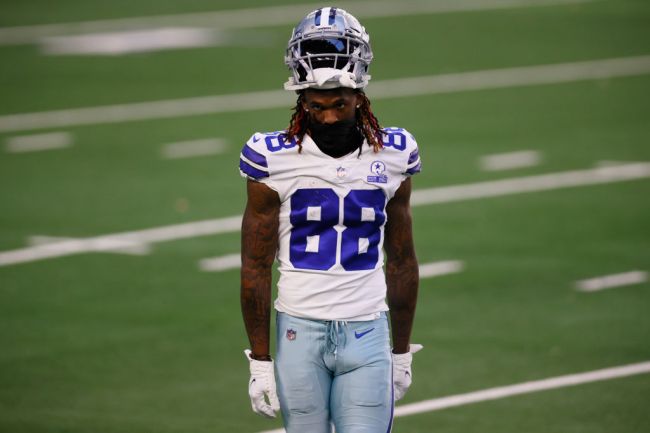 The Dallas Cowboys had not returned a kickoff for a touchdown since 2008 until Ceedee Lamb took back an onside kick against the San Francisco 49ers on Sunday. You’d think that Lamb’s teammates and coaches would be pretty excited that their standout rookie housed a kickoff, but that wasn’t the case.

With Dallas up by seven with 40 seconds left, Lamb could have, and probably should have, just fallen on the football, but with a gigantic opening, he decided to end the game by taking the kick in for the score.

CeeDee and the D is for dagger.

Took the onside kick all the way back to the house 🏡

The kick did sail high on Lamb before he got his hands to it. The ball could have easily left his hands and turned into a disaster for the Cowboys, but the former Oklahoma standout has some pretty sure hands and jets for legs and elected to show those two things off.

Some of his defensive teammates weren’t a fan of his decision of returning the kick and instead would have liked to have seen him just fall down on top of the ball.

“You know, I heard it from the defensive guys after, knowing I should have taken a knee,” Lamb told reporters. “But it was too open, know what I’m saying?

Head coach Mike McCarthy actually laughed a bit when asked his opinion about the touchdown, but also said that it would be a learning moment for the rookie.

“I’ll tell you, I was standing right there. It’s almost like you can’t blame him,” McCarthy said in his virtual press conference. “When he caught it on the high bounce, you could see that he was going to go down. But he just saw this huge hole in front of him, so it was more of a natural reaction.”

“Those are great corrections to have in your team meetings on Wednesdays, when things like that happen. I clearly saw what he saw. But yeah, you want to put the game away, that’s for sure.”

Lamb’s return for a touchdown was probably the most exciting play of the season for Dallas and it all turned out alright for the Cowboys, but nothing is ever simple with this franchise so they just can’t let Lamb fully have his moment after a giant win.