Horrifying Road Race Crash Ends With CyclistHanging Onto A Bridge For Dear Life, Dangling Above A Ravine 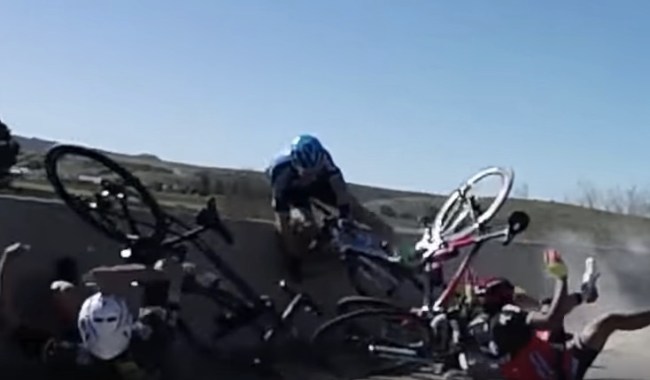 During the Santa Barbara County Road Race on Saturday cyclist Mike Allec went from the final sprint to hanging on for dear life in a matter of seconds. All hell broke loose for Mike after a freak accident sent him and his bike careening off a bridge and towards a ravine.

Footage of the harrowing ordeal was captured by another cyclist competing in the race, Peter Aquino (who finished 23rd btw), and it shows the horrifying moment that Mike Allec was flung off the bridge and found himself hanging on for dear life:

Let’s check that out once more in GIF, shall we? It appears as if Mike Allec tried to take the inside line to avoid all of the mayhem unfolding during the sprint but instead found himself forced over the ledge at an almost 90-degree angle:

Allec’s bike took the worst of the fall, flying over the bridge and into the ravine 30-feet below (at racing speed):

This weekend at the Santa Barbara Road Race our team rider and manager Mike Allec was involved in a spectacular crash in the final sprint that left him hanging off of a bridge above a ravine (30ft below). We are very thankful for the outpouring support from many who were there and more importantly those that helped him off of the bridge.
Words cannot express the gratitude for him being able to walk away from this with road rash, this could have ended much much worse.
Thank you Peter Aquino for the video and to all of the personnel on site including local emergency crews.

As unlucky as Mike Allec is to go from racing to clinging for his life in a matter of moments I’d say that he’s incredibly lucky to have survived this without breaking most of the bones in his body, and potentially dying. If I were Mike I’d probably march out and pick up some Powerball tickets today (I hear it’s up over $200 million).