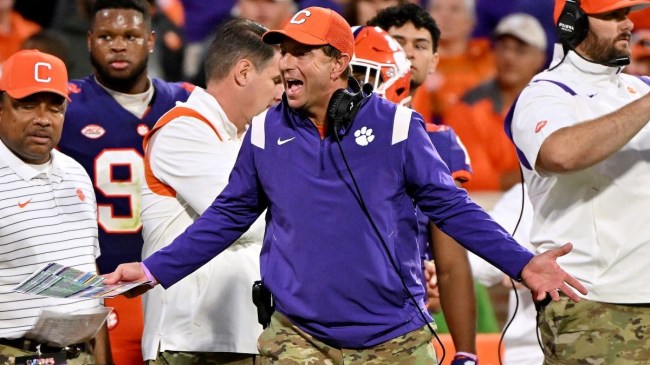 Dabo Swinney’s tenure as the head coach at Clemson University has been nothing short of an overwhelming success. The Tigers promoted Swinney to head coach in 2008 after he previously served as the team’s wide receivers coach.

Since then, all Swinney has done is win two national championships, seven ACC championships (he’ll go for an eighth this weekend) and amass a 160-38 record.

Swinney built Clemson into one of the nation’s premier programs and he’ll have a job at Clemson as long as he wants it. But it appears that one thing, in particular, could make it so that he doesn’t want it anymore.

The Tigers have “struggled” in the last two seasons under Swinney. I use the word struggled lightly, because the Tigers went 10-3 a year ago in what was considered a massively disappointing season. Clemson is 10-2 this year and the favorite to win another ACC title. But it appears all hopes of making the College Football Playoff and winning a national championship are out the window.

Such are the standards that Swinney has set for the program.

The down years have led some to suggest that Swinney needs to make major changes to his staff. Both offensive coordinator Tony Elliott (Virginia) and defensive coordinator Brent Venables (Oklahoma) left to become head coaches last offseason. And replacements Brandon Streeter and Wes Goodwin have had troublesome first years. But Swinney says that giving up control of his coordinator hires is a bridge too far.

Swinney took questions from fans as part of a weekly local call-in show on Monday. One of the fans asked whether the coach was considering making changes to his staff based on the team’s difficulty throwing the ball in 2022.

Apparently, that didn’t sit well with the fiery head coach, who gave a passionate, yet fair response.

“Well, that’s what I get paid to do. All I can tell you is I’m gonna do my job. And if it comes a time where people don’t like how I do my job, then they can hire somebody else. But until then I ain’t ever gonna make decisions based on what other people want me to do. I can tell you that.

If I did that, I wouldn’t be sitting here talking to you tonight. And the reality is, we’re a 10-2 football team playing for our league title and one of the most consistent teams in the country.

Every year is different. Nobody’s got their head in the sand. We’ve gotta get better in a lot of areas. But we know that. But if we wanna fire the head coach and fire the staff every year if we don’t make the playoff, then you’re going to have a new head coach here very often. And you’re gonna have a new staff here every year. Because that ain’t gonna happen a lot. There’s only four teams,” – via On3 Sports

The reality is that the Tigers are still sitting in a pretty good spot. They’re the predominant program in the ACC and have won 10 games or more in 12 consecutive seasons. The sky is far from falling. But that’s what happens when you raise the standard.