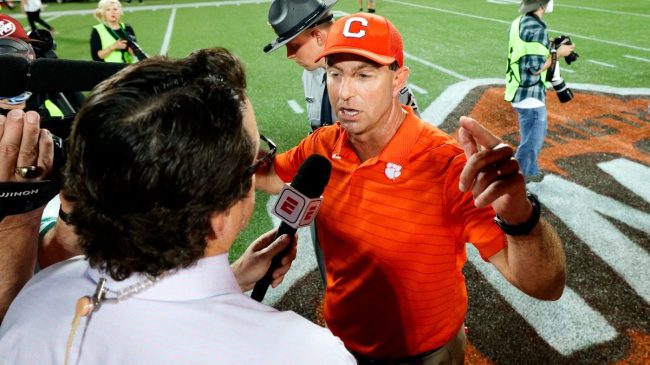 The Clemson Tigers held their season opener on Monday night to cap off Week 1 of college football. They went out there and absolutely destroyed the Georgia Tech Yellow Jackets 41-10. In some moments, it felt like the Tigers were playing up tempo even though they were up by a large margin. Head coach Dabo Swinney claims something totally different though.

The Tigers have a stacked roster with plenty of freshmen who need to develop their game. However, as the Clemson head coach subbed his backups into the matchup, it felt like they were playing faster than at kickoff. Regardless, Swiney makes the bold claim that his team wasn’t “trying to run the score up.”

“We weren’t trying to run the score up.” – Dabo Swinneypic.twitter.com/rhQIIm5Ipu

Based on how the game played out, it’s hard to believe that statement. Even so, Swinney’s reasoning for continuing to play hard throughout the game does make sense. Georgia Tech played decently enough in the first three quarters. But Clemson went ballistic in the fourth quarter and never took their foot off the gas.

At the end of the day, this was a big win for the Tigers. Clemson looked phenomenal in their season opener as the Cade Klubnik hype is already starting. Blowouts happen all the time in college football, but it is odd to hear Swinney make the statement that his team wasn’t trying to run the score up. That’s pretty much what all the best teams do.

We’ll see how this team fairs this year, but the Clemson head coach seems excited about what’s in store for the 2022 season and beyond.