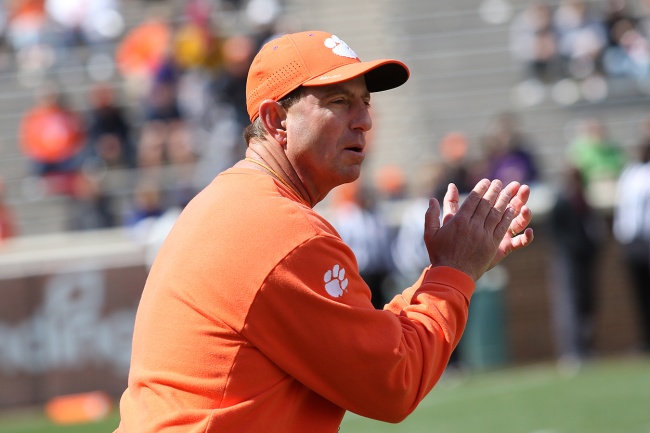 Clemson football did something that had never been done before over the weekend and head coach Dabo Swinney had himself a day. The Tigers head coach increased his street cred by an infinite amount while showing off his basketball skills.

Prior to this past weekend, no college football program had ever hosted more than two dozen blue-chip recruits in the same weekend. Clemson hosted 30.

At one point during the very busy weekend, they took things from the gridiron to the hardwood. And joining the recruits in what appears to be his own personal indoor basketball (half)court was Swinney.

In a video posted by safety prospect Robert Billings, Swinney lines up one-on-one with one of his prospective future players. He proceeds to back the recruit down in the lane before planting his right foot and pivoting to face the hoop.

At that point, the recruit never stood a chance, his face is pure despair as Swinney fades away and knocks down a jumper right in his face. After the shot goes in, the 52-year-old head coach absolutely loses his mind and celebrates by shooting an imaginary arrow like his former quarterback Deshaun Watson.

All of the other prospects in the gym went crazy right along Swinney while the recruit who could not defend him quickly ran out of frame. It was epic, take a look:

For Swinney, who typically comes off as a giant cornball, this was big. He has since gone viral on Twitter and for him to knock down that jumper makes him so much cooler.