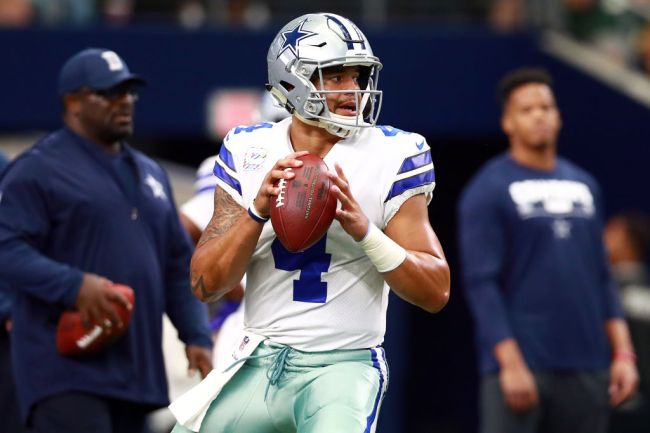 You may think you have an awesome backyard. You may also think you have a pretty kick-ass home office set up as well, but Dak Prescott has you beat in both of those categories.

With the virus completely changing the dynamic of offseason workouts and camps around the NFL, the 27-year-old Cowboys’ quarterback decided to install a 55-yard turf football field in his backyard. This way, he never has to leave his own property to get in a legitimate football workout in.

According to ESPN, Prescott installed the field this spring. It’s complete with a 10-yard endzone and the field was actually built by the same company the Cowboys used to install their field at AT&T Stadium. Prescott decided to have the word ‘faith’ put in the endzone and stencil his D4K logo on the field as well.

“Just to be ready for training camp, not having to go somewhere else and trying to find a field and knowing people could be there filming and watching,” Prescott said. “I’m a guy that kinda likes to work in the dark, I guess you could say. Just come out and show what I’ve been doing. Just give me a sense of privacy, a sense of peace I can have the guys over there and get a lot of work in, still doing what I need to do.”

Prescott has had teammates over to practice since installing the field including rookie CeeDee Lamb who said he felt “like a little kid at the playground” while running routes on the backyard field.

The football field isn’t the only thing in Prescott’s backyard. He’s got a pool as well along with a golf hole. Remember, everything is bigger in Texas, so casually installing a 55-yard field in your backyard is pretty on-brand.