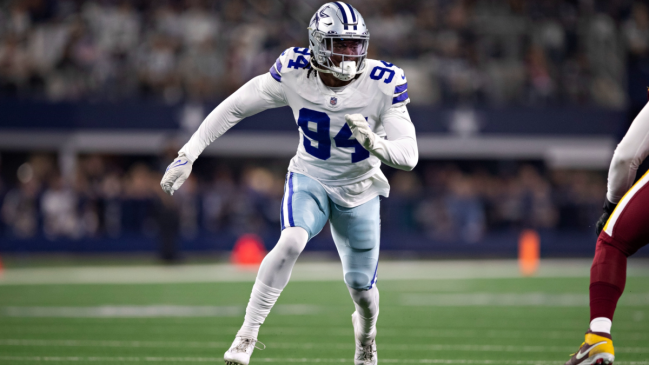 The Dallas Cowboys were riding high this morning with the news that star defensive lineman Randy Gregory was planning on re-signing with the organization.

In 12 games with the Cowboys last season, the pass rusher recorded 19 tackles and six sacks, tying a career best. He also tallied an interception and forced three fumbles in what was his most impressive campaign to date.

Gregory has been in Dallas since the 2015 season, when the team drafted him with a second-round selection. This after leading the Big Ten in sacks as a junior at Nebraska.

The Cowboys were eager to bring the talented defender back to the Lone Star State, and it seemed like a done deal with reports of an agreement hitting social media this morning. Even the Cowboys, themselves, posted an announcement on Twitter of the alleged re-signing.

Unfortunately, those reports were a bit premature.

In an unexpected turn of events, Gregory changed his mind on his terms with Dallas, instead opting to sign with the Broncos.

The deal is apparently structured exactly the same as his offer with the Cowboys.

Same deal for Randy Gregory with the #Broncos as he was to sign with the #Cowboys, source says. Five years, $70 million. https://t.co/GhyC2hAQBX

Apparently, the Cowboys wanted to put some extra language in the contract after the two sides had come to an agreement. That language may have had to do with drug test failures, an issue Gregory was popped for upon entering the league.

.@RapSheet joined @PatMcAfeeShow to break down what happened with Randy Gregory and the Cowboys today 👀pic.twitter.com/nGn1BvMy3J

Gregory fooled everyone, pulling the rug out from under the Cowboys at the last possible second. As they say, nothing is done until pen meets paper.

Social media was quick to jab at the Cowboys for making the announcement before having the deal in place.

Cowboys: 𝙒𝙚'𝙫𝙚 agreed to a deal with Randy Gregory

Turns out he was signing with the Broncos instead 😅 pic.twitter.com/Qy22VbbXZU

And… there we go. Randy Gregory done to the #Broncos. Our first free agency plot twist. https://t.co/pNvCAYFHPM

Jerry Jones after Randy Gregory picked the Broncos over the Cowboys pic.twitter.com/KKVxYRKrgs

After initial reports indicated Randy Gregory would return to the Cowboys, he has instead decided to sign with the BRONCOS, per @MikeGarafolo pic.twitter.com/LBurzXZRbI