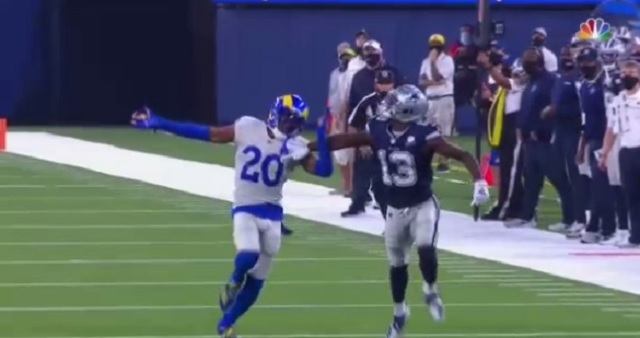 It’s the first Sunday of the NFL season and we already have a controversial call made by referees.

With 30 seconds left in the game and down three points, Cowboys QB Dak Prescott found wide receiver Michael Gallup on a deep ball that put the team in prime scoring position.

Unfortunately for the Cowboys, the play was called back because refs felt Gallup pushed off on Rams DB Jalen Ramsey.

The game-changing OPI call on Michael Gallup that negated a MASSIVE pickup pic.twitter.com/MjqBh4KNer

Cowboys fans not only blasted the refs but they also called out Ramsey for selling the call.

That was a terrible OPI on Gallup. That’s 50-50 hand fighting.

jalen ramsey when he got burnt pic.twitter.com/MJP6sFRv8h

Idc if we shouldn’t have been in this position or not… that’s absolute BS to call that on Michael Gallup when Jalen Ramsey was hooking his arm the whole way down the field ON THE BIGGEST PLAY OF THE GAME!!! pic.twitter.com/V7i4RYeEsh

Ramsey got burnt and flopped to save the W. “Superstar” getting a superstar call. pic.twitter.com/xpVuJL8Zub

BS.. Jalen Ramsey flopped like Lebron James to get this call. pic.twitter.com/nN2kvUhojE