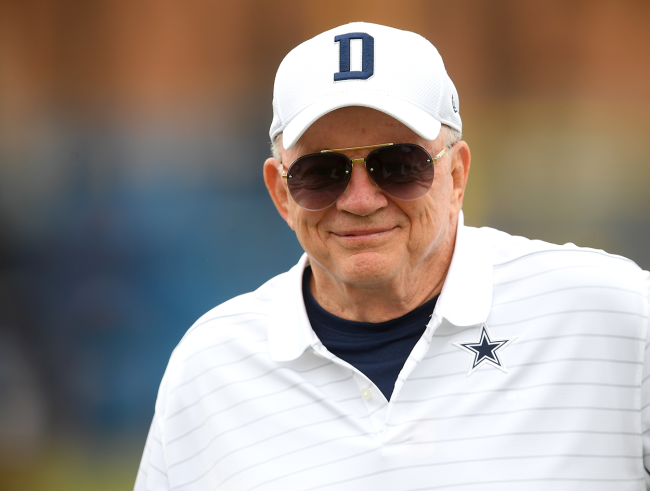 The Cowboys have spent this entire week talking a big game ahead of their game against the Washington Football Team. The NFC East rivalry has reached a fever pitch as both teams eye the top spot in their division and Dallas took it up a notch on Sunday.

Instead of using the traditional metal benches that are supplied in all NFL stadiums, the Cowboys flew their own benches to Washington and set them up on the sidelines of FedEx Field. The benches are covered in the team logo.

As if the #Cowboys couldn’t be any more contemptible, they flew in their own sideline benches for the game … first time and only team that’s ever done that at FedEx … wild #WashingtonFootball pic.twitter.com/Qu46kPmP5P

It is believed to be the first time in NFL history that the move has been attempted and it is perfectly legal. The opposing team controls its sideline so neither FedEx Field nor the Washington Football Team can stop it.

The more I look at this thing, the crazier it is – Jerry Jones is really going for it pic.twitter.com/8uj6Vw6cOu

Dallas’ unprecedented move comes after a long week with a lot of big claims. Head coach Mike McCarthy guaranteed a win for his team earlier in the week and owner Jerry Jones took it one step further, talking about how the stadium will be filled with Cowboys fans.

“We have always sold more Cowboys memorabilia and had our most positive fan support coming from Washington,” Jones said. “Outside of the Texas area, Washington is where we have the most support.”

In response, WFT coach Ron Rivera said that McCarthy was trying to take the focus away from the game.

“You do that for a couple of reasons,” Rivera said. “One, you want to get in our head. Secondly, he’s trying to convince his team. He’s now made it about him. I think it’s a big mistake.”

Whether McCarthy or Jones’ comments were trying to get in the heads of their opponent or not, flying in their own benches surely is. They’re making it their “home field,” in a way.

"It's a BYOB affair – Bring Your Own Benches" – @richeisen 😂 pic.twitter.com/L0SuNRSE23

The move could prove to be great bulletin board material for Rivera’s bunch, or Dallas could back up their talk with a dominant win. Either way, it is going to be an important result for the NFC East and the entire NFL.

The Cowboys are a 5.5-point favorite and will look to avoid history. Washington has won the last two meetings and a win today would mark the first time that the Football Team has won three straight since 1988.

Will the benches be the difference?