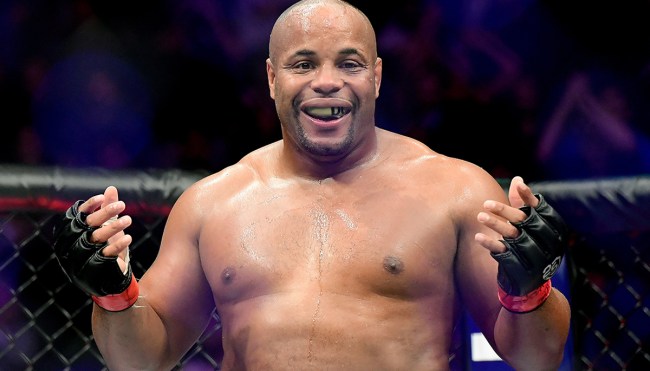 When you consider MMA fighters typically have months to prepare for a fight, the fact that someone who not only gets paid to trade blows for a living but employs a team of people tasked with helping them perform at their peak can fail to make weight is pretty surprising.

With that said, it happens more often than you’d think.

There are a few strategies fighters can employ in an attempt to try to shed some pounds, including one that involves them stepping onto the scale wearing nothing but their birthday suit.

That was the route Daniel Cormier was forced to take when he weighed in prior to his showdown with Anthony Joshua at UFC 210 in 2017, as the defending Light Heavyweight champion initially tipped the scales at 206.2 pounds before managing to hit the 205-pound threshold just a couple of minutes later.

#UFC #MMA Daniel Cormier Misses Weight At UFC 210, Then Makes It 2 Minutes Later. Did He Cheat By Pushing Down on The Towel? pic.twitter.com/6I7WxV2D1u

That weigh-in wasn’t without controversy, as Cormier was accused of skewing the numbers by grabbing onto the towel that was held up in front of him (Joshua’s team unsuccessfully lobbied the New York State Athletic Commission to look into the matter after DC held onto his belt via submission in the third round).

Here’s what he had to say about those allegations shortly after the “Towelgate” scandal first unfolded.

Here's Cormier on the towel pic.twitter.com/wtZEgpGAja

It took more than five years, but Cormier has finally come clean after being inducted into the UFC Hall of Fame on Thursday night. During his induction speech, the fighter copped to getting some help from the towel before explaining exactly what went down.

Daniel Cormier at his HOF speech: "Guys, I want to tell you something, because I think right now is the time to be completely transparent: I think I may have grabbed the towel in Buffalo." 😅

Here’s what he had to say via MMA Fighting:

They even went and called my wife to try and get me back in the tub. I said no way, this s—t is over. She told me ‘Daniel, just take a hot bath.’ I go, it’s not that simple.

I walk back, [my coach] he goes ‘DC, do you remember the old wrestling trick?’ I said, can you stand behind me? Because there’s two — you can put your hands behind you and your person can lift you up. He said, ‘No, it’s the towel one.’

Do you understand the level of ridiculousness that has to happen in order for that to work? I looked down and I could not believe my luck. I am a lucky guy. Even when I would lose, the belt would just somehow come back to me. I was like, I’m a lucky guy.

So I look down and the commissioner’s on the floor looking at the scale. There’s a second lady and I look down — she’s right next to him, so I grab the towel and I’m like, ‘S—t, we’re home free.’ [Marc] Ratner, I know I would never get you like that, but in New York, first time, you know what it is. It is what it is.

When you consider Joshua retired after losing to Cormier at UFC 210, he might not find the story as amusing as other people, but at this point, you’ve got to take what you can get.