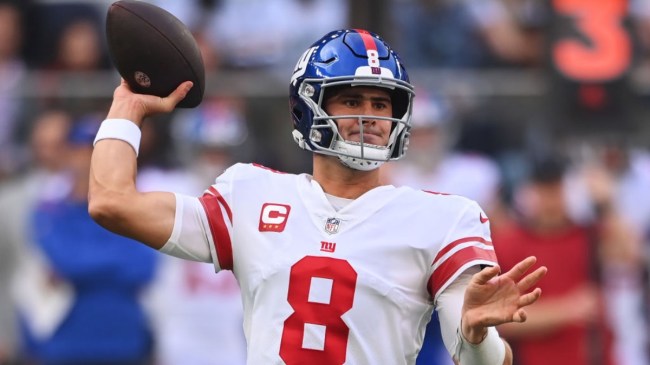 Heading into this season, the New York Giants decided they were willing to gamble on Daniel Jones’ contract situation. They had the chance to activate the 5th-year option on his rookie deal to lock him down for another year relatively cheaply. They turned that chance down.

That sent Jones into the season without a contract beyond this year and needing to prove that he’s deserving of big deal next year.

While he hasn’t exactly put up crazy numbers this year as the Giants’ quarterback, he has done the only thing that really matters in the NFl. He’s been winning football games.

Through 5 weeks, the New York Giants currently hold a record of 4-1 that includes upset wins over the Tennessee Titans and Green Bay Packers.

The Giants’ new winning ways have some wondering about Jones’ contract situation, but he said today that it hasn’t been his focus.

Daniel Jones was asked if he’s thinking now that Giants should reward him with a new contract given his recent play.

“No, that’s certainly not my focus.” #Giants pic.twitter.com/SiH5rpzr16

His passing numbers may not be the most impressive, but Jones has been able to do the one thing that Giants fans have been hoping for throughout his career. He has really cleaned up his game.

Where turnovers have been an issue in the past, Jones has managed to keep himself from making costly mistakes this year. The 4th year quarterback has only thrown 2 interceptions this season and he hasn’t lost a fumble since losing one in Week 1.

That’s been the biggest difference so far as he had lost 36 in 37 games over the first 3 seasons of his career.

He might not have the Giants entirely convinced about giving him a long-term deal yet, but if Jones can keep winning, they’ll have to seriously consider keeping him around beyond this season.