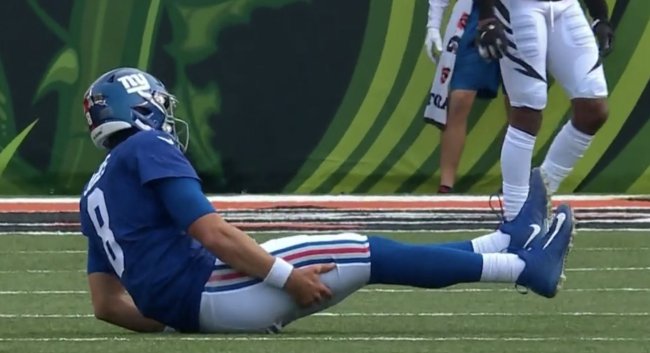 New York quarterback Daniel Jones left the game in the third quarter of Sunday’s game against Cincinnati with a hamstring injury and is questionable to return, but unlikely. He was injured on the Giants’ first possession of the third quarter after the pocket collapsed and forced a seven-yard scramble. Jones landed with his legs folded awkwardly under him as he was hit by Bengals safety Vonn Bell and grimaced as he grabbed his right hamstring.

He tried to play through the injury and completed a 1-yard-pass to running back Wayne Gallman on the next play but could not step into the throw and pulled up awkwardly, with clear discomfort.

Colt McCoy replaced Jones, who immediately went to the medical tent on the sideline. The 11th-year journeyman took over and tried to lead his team to its third straight victory in his absence.

Colt McCoy is now in at QB for the Giants after an injury to Daniel Jones. pic.twitter.com/LSEVkrY2Rj

Jones tried to return two plays later but exited again and is listed as questionable to return. It did not seem to be more than a mild strain and if he is to miss time, it will not extend beyond a week or two to nurse his hammy. Worst case scenario, he tore the muscle and will miss a good chunk of time, but it looked more like the former than the latter. He has played every snap this season and New York is still in the mix for finishing atop the NFC East. Prior to his exit, Jones completed 16-of-27 passes for 213 yards.

Naturally, the internet had a wide range of reactions surrounding the team’s franchise quarterback going down:

Giants announce that Daniel Jones is questionable to return with a hamstring injury. Kyler Fackrell out with a calf injury. And the Bengals just converted a fake punt. pic.twitter.com/nmp2prst6T

Daniel Jones is likely done for the game. Now we gotta rely on Colt McCoy pic.twitter.com/SsozGE2QHR