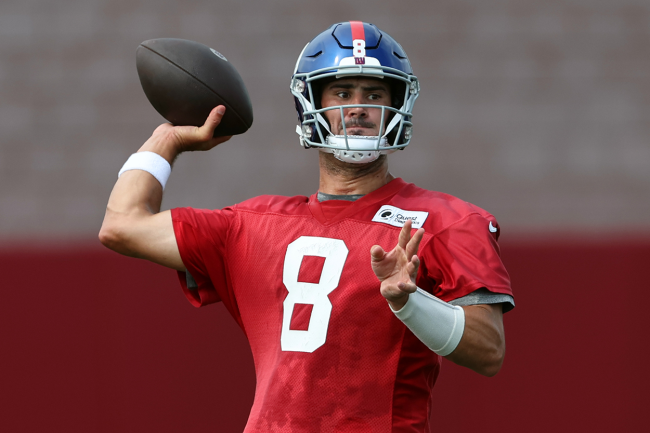 There is a buzz around East Rutherford, New Jersey prior to the NFL season for the first time in a long time. Although there have been a few years of success since their Super Bowl win in 2011, the Giants have been extremely overwhelmingly underwhelming over the course of the last decade.

New York has a new head coach after hiring Brian Daboll away from Buffalo, 2018 No. 2 overall pick Saquon Barkley is back at full health, and 2019 first round pick Daniel Jones is back to lead the offense. Daboll turned the Bills offense around over his time with the team and the hope is that he can do the same with the Giants.

However, Jones’ most recent interception at training camp does not instill much confidence. It was very, very, very ugly.

On the play, Jones fakes the handoff for the counter while his offense pushes down to the left side as if it was a designed run. Meanwhile, Jones rolled out to the right on the play-action and looked down field.

After setting his feet and finding his intended target down the left side, Jones unleashed a throw to receiver Collin Johnson, who seemed to have a step on the two defensive backs guarding him. There was only one problem— Jones completely missed his target and it was intercepted.

The throw was abysmal. It was ugly.

But it may not have been Jones’ fault. It looks like Johnson may have run the wrong route or didn’t get to where the ball was going in time.

Either way, while Johnson undeniably deserves part of the blame, it was all-around awful and did not instill much confidence in the new offensive outlook. Jones threw into double coverage and it couldn’t have been worse.

Fortunately, there is time to get things right before Week 1. Fingers crossed, Giants fans!