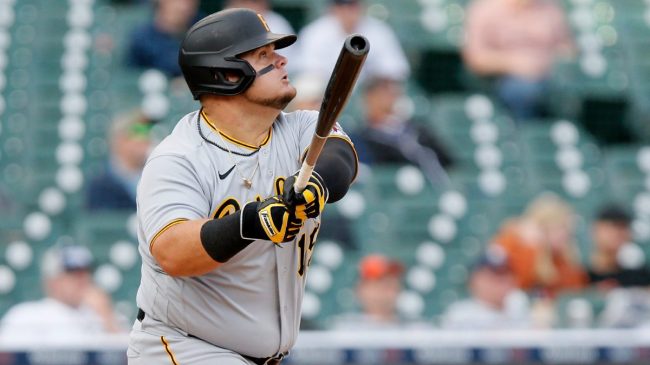 Daniel Vogelbach is a large human being.

The 270-pound first baseman looks more like a defensive end than an infielder. Due to that stature, the left-handed slugger has garnered the nickname “The Babe,” an obvious reference to storied home run hitter George Herman Ruth.

And Vogelbach certainly looked the part on Wednesday.

In Pittsburgh’s 5-3 win over the Los Angeles Dodgers, he flexed his muscles with a solo blast to give the Pirates a late lead that they wouldn’t relinquish.

The shot was Vogelbach’s fifth long ball of the season. Take a look.

Vogelbach turned on a 96 MPH fastball sending it to the last row in the right field bleachers. If he’d gotten under it a bit more, it would’ve easily cleared the short porch and sailed into the Allegheny River.

And Vogelbach knew it was gone the moment it left his bat. The lefty took a moment to admire it before taking his trot around the bases.

The blast left the bat at over 110 MPH and landed 407 feet away from home plate. Easily a homer in all 30 ballparks (it might’ve cleared the upper deck in the Yankees Little League Park).

The blast put the Pirates up 4-3 in the bottom of the seventh inning. They’d tack on one final run in the next frame to land the 5-3 victory, and Vogelbach was a big reason why.

He reached base three times on the day to help Pittsburgh win a huge series as they fight to get back to .500 on the year. Hopefully they’ll see a few more blasts from The Babe to keep the momentum alive.