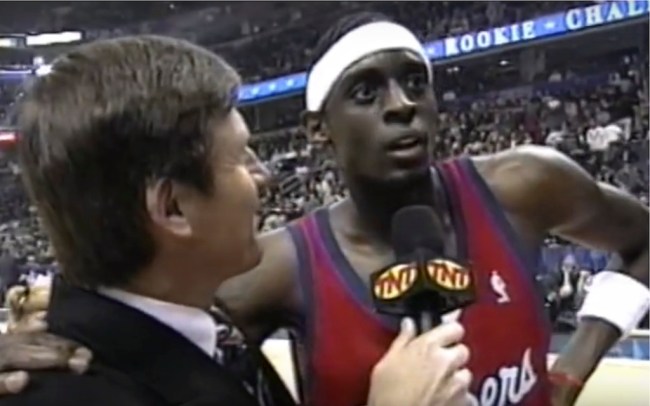 With a nickname like “The Punisher,” former NBA player Darius Miles was a bad, bad man on the basketball court. For anyone old enough to remember the high-school-to-the-NBA player’s career, like myself, the dude threw down the hammer on defenders with absolutely no regard for their feelings. He was a mix between Shawn Kemp and Kevin Garnett, with the swagger of Allen Iverson. It’s one of the reasons why the Los Angeles Clippers took him with the No. 3 overall pick in the 2000 draft, believing that the then 18-year-old was destined for stardom.

Unfortunately, Darius Miles’ career didn’t reach that level for whatever reason. Bouncing from team-to-team due to inconsistency and injuries, Miles ultimately suited up for five teams during his seven-year NBA career. He went bankrupt soon thereafter. He became a figment of every hoops fans’ imagination because he was out of the league before we eve got to see the real him.

Although Miles didn’t become the star many had projected him to be, he still has some awesome stories to tell from his time in the limelight — and he shared some of them in a recent feature with The Players’ Tribune, which was guest edited by his former teammate and good friend, Quentin Richardson.

Among the topics Miles talks about are his upbringing, his wide eyes after being drafted and some candid stories about his upbringing in St. Louis. But some of the A+ stories Miles talked about included Shaquille O’Neal and Michael Jordan, both of whom F’ed with him a little bit.

In regards to Shaq, Miles described a time when, running late for practice, the big fellas faked to be a cop and pulled him over, then offered to pay his fine for showing up behind schedule.

I remember one day I was running late for practice, so I was flying down the 405. All of a sudden, I look in the rearview, and I see the flashing lights. This unmarked police truck is right up on me. Tinted windows. Big heavy-duty truck. Woop-woop.

I knew I was speeding. So I pull over, and I roll the window down, and I’m reaching over into the glove compartment to get my papers …. Then I hear this voice. Big, booming voice.

I’m like, Damn, they got the sergeant on me or something? I turn to look out the window, and I can’t even see this dude’s face he’s so big. All I see is his chest.

Then he bends down and looks in the window. Big, dumbass grin on his face.

He don’t miss a beat. He taps side of my truck, turns around and says, “Don’t worry about it. I’ll pay your fine. Just holler at me.”

I’m looking in the rearview mirror, like, How the hell …

Shaq’s got one of those old-school police lights that you put on the hood of your car like you see on C.O.P.S. He gets in, laughing his ass off, waving at me.

For those who don’t remember, back in 2001, Shaq was the king of Los Angeles. Playing for the Lakers and winning titles, the dude was the most dominant player in the league, but he still had time to punk other players like this. Pretty hilarious.

Don’t get me wrong, getting F’ed with by Shaq is cool, but getting respect from the GOAT, Michael Jordan, brings a helluva lot more attention. And, in his Players’ Tribune piece, Darius Miles talked about how MJ hooked he and Quentin Richardson up by bringing them over to the Jordan Brand family, even though they were teenagers.

People ask us all the time how we got signed by Jordan Brand so young. We were rookies rocking Jordan Brand. Man, it’s a crazy story. Right after we got drafted, me and Q were at Jordan’s camp in Santa Barbara. This was right after Zo’s Summer Groove. So we’re sitting around after a game, icing our knees or something, and MJ comes walking over to us, looking all concerned.

He’s looking down at our feet.

He says, “What’s all this bullshit?”

Man, that summer, And1 had been sending us all this free stuff. I’m talking crates of shoes, clothes, headbands. That was when And1 was really popping, so we were rocking with it. We don’t know no better! We’re 19, like, we winning!

MJ is not having it. He’s looking down at our feet, wild disappointed.

He’s looking at us, cold. Studying us.

MJ turns around, super cool, and he just goes, “Alright, I got you.”

Like two days later, our agent is calling us up all breathless and whatnot, like “Guys! I just got these contracts faxed over from Jordan Brand! Guys! God damn!”

I mean, Mike’s picture was on my mantle in East Saint, you know? That meant more than anything that he showed us respect like that and made us part of his family. We started getting all these boxes of super-rare Js mailed to us before they even came out…

But that was the moment that was like … Damn, look at where we are now.

The entire Players’ Tribune piece is amazing, as Miles opens up by candidly talking about a number of different topics and documenting his NBA journey, while Richardson provides some comedic humor with his Editor’s Notes. Take a look at the whole piece over a The Players’ Tribune to find out what the hell really happened to Darius Miles.