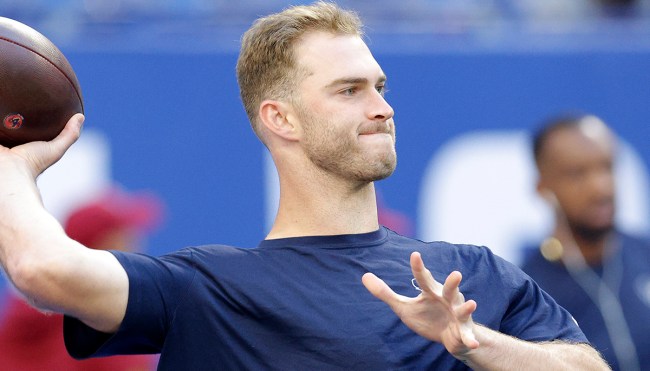 If you were Fairly Online in 2018, there’s a good chance you remember “Neck Guy” taking the world by storm after the internet became absolutely captivated by the mugshot of a man who likely views the top button on dress shirts as his mortal enemy.

Last year, we were treated to a worthy successor to the memes that guy spawned courtesy of Texans quarterback Davis Mills. The Stanford product was handed the starting job just a couple of weeks into his rookie season, and while his performance left plenty to be desired, the same can’t be said about the noticeably long neck that became a hot topic of conversation among NFL fans.

Now, a particularly impolite person might say something along the lines of “Mills has a bright future playing a Kaminoan in a Star Wars movie if the whole NFL thing doesn’t work out” or “He’s lucky there’s no rule that explicitly states giraffes can’t play football,” but that would just be mean.

However, that hasn’t stopped other people from making jokes at his expense—including a Twitter user who hilariously delivered on a promise to Photoshop a picture of Mills’ neck getting progressively longer each time a previous post got a certain number of likes.

Mills got the chance to address those memes earlier this week when he sat down with Landry Locker and John Lopez of SportsRadio 610 during a conversation at training camp.

#Texans quarterback Davis Mills on his viral moment early in his career, the neck picture. He thinks it's as hilarious as a lot of fans do. #WeAreTexans pic.twitter.com/Yq9GDlYNeJ

One of the hosts noted “Your neck’s not as big as that picture” before asking the QB if he was aware of how much attention he’s managed to generate.

Mills confirmed that’s the case, saying, “I definitely noticed it. I had some friends send it to me right when it started blowing up. I’ve never laughed so hard” before giving a special shoutout to the person responsible for the aforementioned Photoshops.

Props to him for taking it in stride.