Caps Fans Flood The Streets Of D.C. With ‘We Want Vegas!’ Chants After Advancing To Stanley Cup Finals 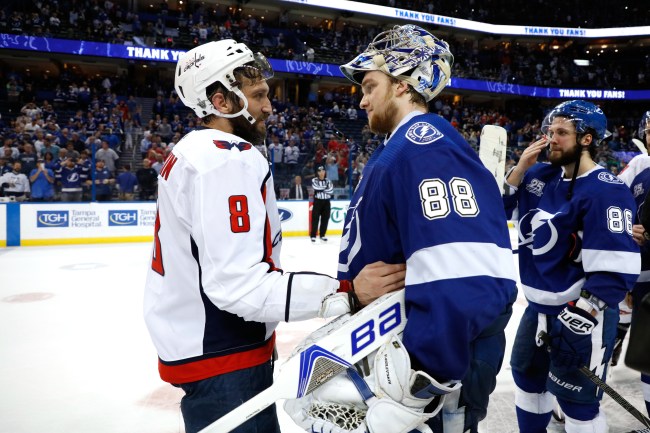 The Washington Capitals advanced to the Stanley Cup Finals last night after beating the Tampa Bay Lightning who went ice cold and didn’t score a goal in the final two games of the series after digging themselves out of a 0-2 deficit in the series and taking a 3-2 lead. ]

This is only the second time the Caps are playing in the Stanley Cup Finals and the first time since 1999, so it has been a LONG time coming for Caps fans and the future Hall of Famers on the Caps’ roster. Fans in D.C. showed up in droves to Capital One Arena to watch last night’s game and after the Caps won, thousands and thousands of Caps fans took to the streets of D.C. to celebrate their team’s win with most of them chanting ‘We Want Vegas!’

Here are some scenes of the jubilation in our nation’s capital last night:

Chants of We want Vegas. pic.twitter.com/x2Apgarbt6

A bit late but I got that guy climbing the pole! pic.twitter.com/E4kHwyl7O8

This is wild. so many people pic.twitter.com/KlJH14VOJX

Here’s a look at today’s cover of The Washington Post, an instant classic:

Definitely need to get your hands on today’s print edition of The Washington Post. Amazing coverage of the Capitals advancing to their first Stanley Cup final in 20 years. #StanleyCup

I am, definitely salty today about my Tampa Bay Lightning going completely flat in the final two games after rallying from a 2-0 deficit in the series to take a 3-2 lead, only to not score a goal in the final 130+ minutes of play (over two full games). But, the options for a Stanley Cup winner now are Alexander Ovechkin who deserves one as much as any player alive or the Vegas Golden Knights, one of the coolest stories in sports. It’s going to be a pretty incredible Stanley Cup Finals this year and one that’s sure to bring in massive TV ratings.