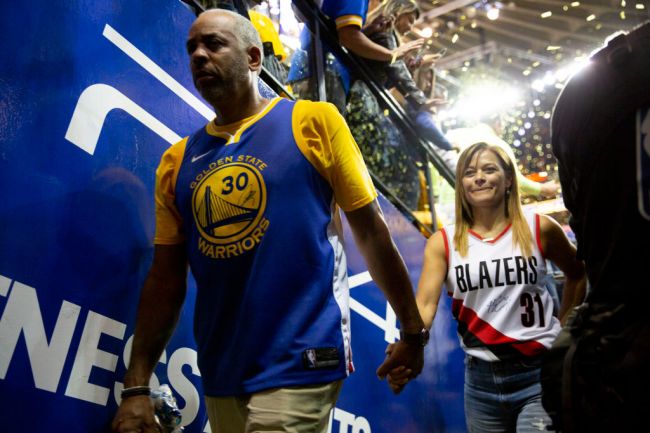 It appears that Dell Curry personally knows the man with who he claims his wife Sonya is cheating on him with.

Earlier this week Dell accused his Sonya of having an extra-marital affair with former Patriots tight end Steven Johnson.

It’s all spelled out in court docs, obtained by TMZ Sports, in which Steph Curry’s father says Sonya is, and has been, dating Steven Johnson — a 6th-round pick in the 1988 NFL Draft.

In the docs, Dell says Sonya “began her extramarital affair with Mr. Johnson during the marriage and prior to the date of separation, and she lied to [Dell] each time she cheated on him.”

Dell, in the docs, says Sonya is actually living with Johnson in Tennessee … and claims she should not be entitled to alimony because of it.

Thanks to some internet sleuthing, there’s evidence that Dell, Sonya, and Johnson, who all went to Virginia Tech at the same time, have flown together to college basketball games throughout the years.

Also it appears the Pats TE Steven Johnson was a "friend" of the family……..

Not a random guy Sonya met, looks like he was cool with Dell before he stole his wife https://t.co/YNjDYkb7SS pic.twitter.com/Y2w2hJs3F3