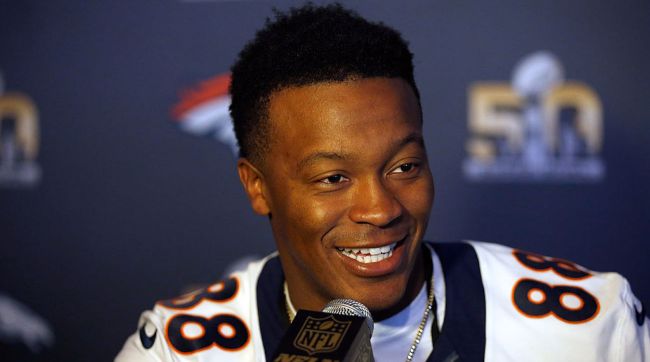 Former Denver Broncos wide receiver Demaryius Thomas, who passed away in December at the age of 33 years old, has been posthumously diagnosed with Stage 2 CTE by doctors at Boston University, according to a report from the New York Times.

As stated in the report, while both family and medical officials previously indicated that Thomas’ untimely passing due to a seizure related to a 2019 car accident, “his behavior became increasingly erratic in the last year of his life, which was marked by the memory loss, paranoia and isolation that are hallmarks of chronic traumatic encephalopathy, the degenerative brain disease linked to repeated head hits.”

Now, doctors say the former Super Bowl champion and Pro Bowler was suffering from CTE. At this time, while the Fulton County coroner’s office has yet to determine an official cause of death, BU doctors say Thomas “most likely died after a seizure.”

In 2019, Thomas had been driving 70 miles per hour in a 30-m.p.h. zone in Denver when he lost control and flipped his car multiple times. His head cracked the windshield and the Jaws of Life were needed to remove him from the vehicle.

Jamuel Jones, who had also played college football, was riding in the passenger seat and said doctors told the two football players that their ability to absorb hits might have saved their lives. [via New York Times]

Thomas was drafted by the Broncos out of Georgia Tech in the first round of the 2010 NFL Draft. During his eight seasons in Colorado, Thomas — who spent a few years racking up numbers with Peyton Manning — made four Pro Bowls and won a Super Bowl title.