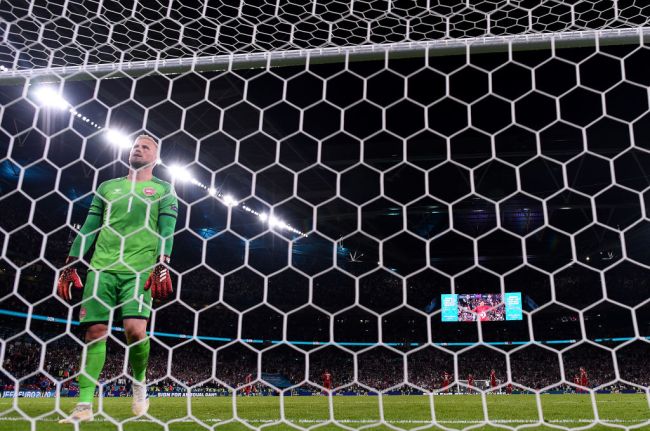 Denmark goalkeeper Kasper Schmeichel did not hold back his thoughts about England. On the eve of his country’s Euro 2020 semi-final match against the British, the 34-year-old Dane took direct jabs at his opponent.

Kasper Schmeichel was asked what it would mean to stop football from 'coming home' … 😅 pic.twitter.com/0AAwNr8J0L

He then went on to concede the game-winner to Harry Kane and lost. Tough look.

England supporters have been singing “Football’s Coming Home” since the 1996 European Championships. The song has become a battle cry for the country, referring to the soccer team bringing a trophy back home.

Here is a good breakdown of the anthem and its origin:

Since the song’s creation in 1996, the team has not finished higher than third in the Euros or Nations League Finals and has not won a World Cup. Schmeichel spoke to the struggles in his pre-match comments.

“Has it ever been home? I don’t know. Have you ever won it? ’66? Was that not the World Cup?” he said. “To be honest I haven’t given any thought to what it would mean to stop England. It’s more what it would do for Denmark. I’ve focused very little on the England team.”

“He’s right in terms of that it hasn’t come home in this competition for us,” Kane said. “But we’re in a great position, we’re two games away.”

Well, after Wednesday’s semi-final, England is in even better position, only one game away. Schmeichel, on the other hand, is forced to eat his words after conceding a match-winner to Kane.

How it all went down.

England was the favorite coming into the match and was playing at its home stadium. However, through the first half, it didn’t look it.

HE SCORES THE FIRST FREE KICK GOAL OF EURO 2020 😱 pic.twitter.com/mnB3IcmFKl

England got on the board about 10 minutes later, but the equalizer came on an own goal.

THE OWN GOAL STRIKES AGAIN! pic.twitter.com/t6I4GgAYVc

Neither team could pull ahead through regulation and the score remained until the 104th minute. Denmark was called for a foul in the box and England was awarded a penalty kick.

Kane stepped up to take the kick and had his attempt saved by Schemeichel. However, the mad lad found the rebound and finished.

KANE SLAMS IT HOME AFTER HIS PENALTY WAS SAVED! pic.twitter.com/msiI9kyMcF

Schemeichel only conceded the one goal (the other coming on the own goal) but one was all it took. England held on to win 2-1.

Schemeichel shut up— for now.

In the end, it was England who prevailed the victor, forcing Schemeichel to temporarily eat his words. The English side will advance to face Italy in the Euro 2020 final on Sunday with hopes of bringing home the country’s first-ever European Championship.

Should England win on Sunday, it will have come home. Until then, Schemeichel’s comments technically remain true.

Regardless of the upcoming result, choosing to address an opponent and then losing to that opponent is brutal for Schemeichel.