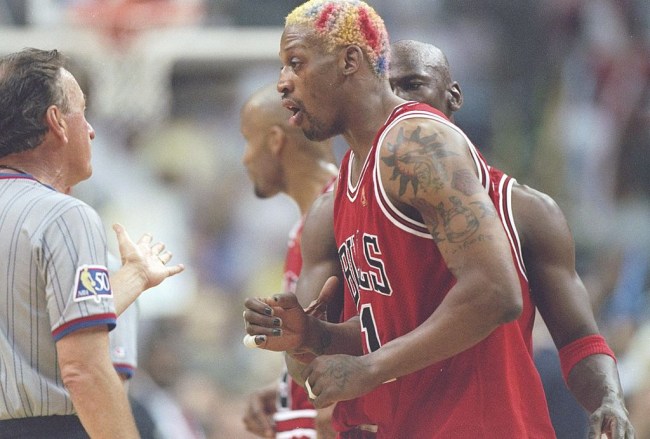 “I didn’t know what I was doing,” Rodman told me when we chatted ahead of the premiere of the highly-anticipated 30 For 30 that will be airing on ESPN on Tuesday night.

It’s safe to say being himself worked out pretty well.

Rodman was a late bloomer who failed to make his high school basketball team but took up the sport after experiencing a growth spurt while working as an airport janitor making $6.50 an hour after spending six months homeless as a 19-year-old.

He would go on to make a name for himself following a few standout seasons at Southeastern Oklahoma State University under the guidance of coach James Rich, who served as the father figure he never had in his life.

“He really taught me how to do things and work for and earn your money,” Rodman said.

Rodman would find another mentor in the form of Pistons head coach Chuck Daly, who quickly took him under his wing, telling the budding defensive star, “Dennis, no matter what you do, I’m gonna love you no matter what. I understand that you want to play this game but you have to understand certain things.”

Rodman experienced a meteoric rise over the course of his seven seasons in Detroit but found himself facing rock bottom in 1993 when he was discovered asleep in his car in the parking lot of The Palace within reach of a loaded rifle—a night on which he said he decided to embrace his true self after thinking about ending it all.

Shortly after, he was traded to the Spurs, where he found himself butting heads with then-GM Gregg Popovich, who would eventually send him to the Bulls a couple of years later in a life-changing (and lopsided) trade for Will Purdue.

Phil Jackson immediately embraced his new player, telling Rodman, “Dennis, go be you” and he did exactly that.

While Michael Jordan was notoriously tough on his teammates, Rodman said he never had a problem with the superstar, who helped him to further develop his game:

It was me, Scottie, and Michael. We knew the system of the game. Michael loves to win, I love to win, Scottie loves to win. The whole team loved to win.

He was so competitive with everybody. I wasn’t used to playing with people that have that desire and that drive to go out an win every single day. I think most guys fed off of that and that’s what made it such a great team.”

Jordan was also a notorious gambler but Rodman says he never got in on the action with his teammate, as he was more concerned with watching game tapes than playing cards.

However, he did have quite the penchant for putting money on the line (he told me he once blew $150,000 in a single sitting at a casino) and made frequent trips to Las Vegas—including some notable visits during the 1997 NBA Finals against the Jazz:

“Phil said, ‘I know you don’t want to participate while living in Park City so you can go to Vegas and stay there and come back for the games.’

It was me, my crew, Carmen Elektra, and Chris Chelios. We would go to Vegas and fly back for the game. I had a couple of guys—Eddie Vedder was there—and we’d hang out, I’d work out, party, and come back for the game then go back and shoot some craps, party some more, then come back for another game.

Phil was like ‘He likes it in Vegas, that’s how he gets motivated,’ so he just let me do it.”

Rodman would make more than a few questionable decisions with his money—he once dropped $250,000 on jewelry for Elektra while in France—but says there’s only really one purchase he regrets making (although he also had some regrets about ultimately giving it up):

During our chat, Rodman also offered up some thoughts on the current state of the NBA. While he may have played on one of the original superteams, he decried the current trend of star players teaming up and chasing rings, saying:

“You’re doing a disservice to the city that paid you all of this money and all of a sudden you’re going to go to another city to try to get an easy ring.

Basically, when you get a ring today you don’t really earn it. I mean, to each his own. They get their money and their fame and their fortune but they’re not there from the beginning to the end.”

He also believes players today are too friendly with each other and that he never would have engaged with opponents the way many current athletes do:

“It’s OK in the offseason but not when you’re doing it during the season. When the game is played you have to play. I don’t care if you’re my brother, my sister, my aunt, my uncle. I’m going to go out there and whoop your ass.

I don’t give a shit about talking to you before the game. My job is to go win.

There’s too much today where they’re out on the court hugging and kissing each other and trading jerseys. What the hell is that all about? You can do that shit at the end of the fucking season.”

In one of his memoirs, Rodman expressed his displeasure when addressing the increase in rookie salaries and claims things have only gotten worse since his playing days as supposedly unproven players rake in massive amounts of cash—especially the recent case of Zion Williamson:

“Zion got $20 million and a shoe deal and I’m like, ‘Really?’ He’s played like one ounce of basketball.

What can you even say about it?”

Of course, you can’t talk about Dennis Rodman—or talk to him—without addressing the many off-the-court issues he faced over the course of his career (he says he never touched drugs but had trouble staying off the sauce), like the time he crashed a motorcycle while drunk in Vegas in 2003 and promptly visited a strip club while still wearing a hospital gown after being discharged.

Rodman says he’s felt pressured throughout his life to live up to his reputation as a bad boy and that people today still expect him to do so despite his concerted efforts to reform himself.

He also notes he never consciously attempted to draw attention to himself with his antics but that he simply did things because he liked doing them:

“I was trying to be very independent. I really didn’t try to fight the system. I was just trying to be an individual and be free and have a good time and enjoy life. Back then, people didn’t know how to handle me for a long time. Tattoos, piercings, wedding dress. How can you handle this?”

Rodman also thinks he wouldn’t be under the microscope he was if he’d been playing in the NBA today (the league reportedly hired a private investigator to follow him around during the 1989 season), saying:

“Ten years later, people started to realize it’s cool to have tattoos, it’s cool to be an individual. It’s cool to do all this stuff now. Now everyone on the planet is trying to do things that I did.”

If you want to learn more about his wild ride, be sure to tune into Rodman: For Better or Worse when it airs at 9 P.M. on Tuesday on ESPN.