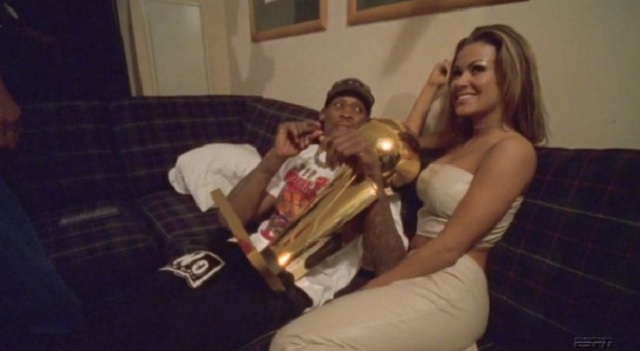 ESPN’s 10-part documentary on the 1998 Chicago Bulls was supposed to be an ode to Michael Jordan and his greatness but instead, Dennis Rodman and his wild antics stole the show.

In the final episode of The Last Dance, the infamous story of Rodman skipping practice in the middle of the NBA finals to go hang out with Hulk Hogan and the NWO came to light and it was absolutely amazing.

Rodman went AWOL on MJ and the 90s Bulls bc he had to go join the nWo. If you're not a certain age I don't think you can really wrap your head around how that's the coolest sentence you could've possibly put together in 1998.

the Utah Jazz said they were waiting the entire year for their rematch with the Bulls and this was Rodman's response pic.twitter.com/YPXFQp4Gte

Apparently, the WCW paid Rodman $250,000 for his brief appearance which more than covered the measly $20,000 fine from the NBA.

Dennis Rodman skipped a media session the day before Game 4 of the 98 NBA Finals and was fined $20,000.

When he returned, his teammate Ron Harper said "I think that makes him a good businessman." pic.twitter.com/fK1hxZaQcH

Following his appearance on WCW, Rodman hit a game-clinching free throw in a finals game against the Jazz and then celebrated the Bulls championship win a few days later by hitting the DX “suck it” crotch chop on the court.

LMAOOO! Dennis Rodman missed practice during the finals to join NWO & hit DDP with a chair, then gave everyone the suck it sign when they won the championship! Legend! #LastDance pic.twitter.com/A9RePm8CGu

After winning the title, Rodman spent some quality with the trophy and his then-girlfriend Carmen Electra.

Dennis Rodman, wearing NWO pants, with Carmen Electra after the 98 NBA Finals and they kiss the Larry O'Brien trophy pic.twitter.com/ZMDgnDpdkP

Rodman may be a little wacky but he lived the life most of us could only dream of.