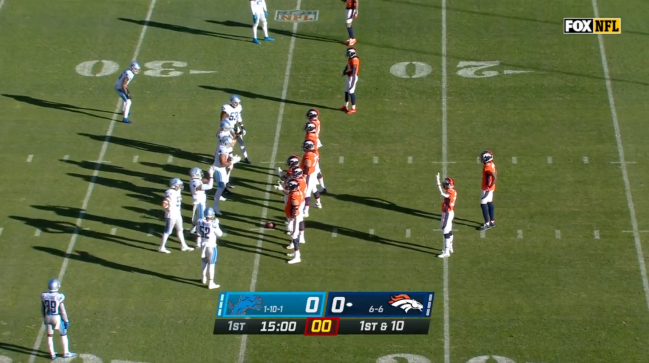 The Denver Broncos paid tribute to late wide receiver Demaryius Thomas during the first play of Sunday’s game against the Lions and it will give you chills. It was the perfect way to honor one of the organization’s greats.

After Denver received the opening kickoff, head coach Vic Fangio’s team took the field in “missing man formation” with only 10 men. Wide receiver Courtland Sutton took a knee on the sideline to leave the 11th spot, a receiver position, “open” in honor of Thomas.

When the crowd realized what was going on, they got out of their seats and loudly chanted “DT” throughout the stadium. The Broncos then proceeded to let the clock run down and took the delay of game penalty.

In an act of solidarity for the late Thomas, the Lions turned down the penalty.

It was an goosebumps-inducing moment.

Thomas, who was the star pass-catcher for Denver from 2010 to 2018, tragically passed away on Thursday. He was only 33 years old.

The Broncos did an amazing job of keeping Thomas’ memory alive on Sunday. Prior to the game, Sutton and fellow wide receiver Tim Patrick paused for a moment in the tunnel to pay their respects.

During the game, as the players took the field, the stadium took a moment of silence to show their respects to the late great.

With Thomas’ help, the Broncos made it to two Super Bowls and won one of them. He was considered not only a fantastic football talent, but was and is universally loved by everyone he came into contact with.