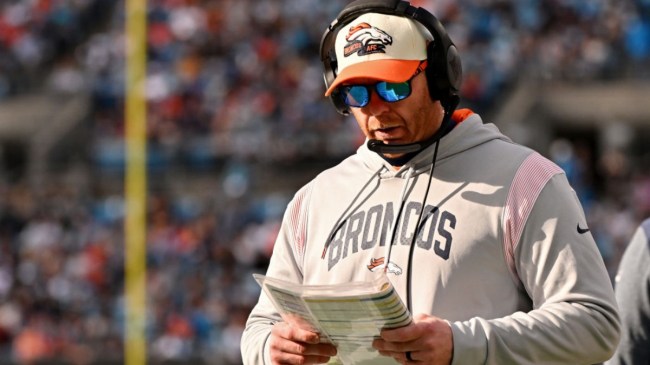 Things seem to just be getting worse for the Denver Broncos every week.

This season has been a mess every step of the way for the franchise, which entered the year expecting to contend after adding Russell Wilson to fix their quarterback issues.

Instead of contending, they’ve worked their way to a 3-8 record behind a series of awful performances from their offense. Along the way, there have been rumors about 1st-year head coach Nathaniel Hackett’s job security. There have been plenty of jokes made about Russell Wilson and his contract.

Now the Broncos have even had a defensive player yell at Wilson on the sideline during a game.

The incident came during their loss to the Carolina Panthers on Sunday, with Mike Purcell yelling at Wilson in what he claims was an effort to provide a spark.

Now Hackett has chimed in on the incident. He told the Denver Post’s Kyle Newman that he appreciates Purcell’s passion and he understands it.

Nathaniel Hackett on Mike Purcell shouting at Russell Wilson in Carolina loss: “I appreciate (Purcell’s) passion and understand it”

You want every one of your football players to want to do anything to win, and you want them to hold each other accountable, and you want them to fire each other up. Whenever that comes from a player [to another player], that means a lot to him. So I appreciate [Purcell’s] passion and understand it. I just don’t want him to get the personal foul in that situation.

While passion may have played a part in what happened, it seems just as likely that frustration was the driving force behind this moment.

Everybody on the Broncos must be extremely frustrated with how far they’ve fallen short of expectations, especially on the offensive side of the ball.

Unfortunately for Hackett, it doesn’t look like any amount of passion from him or his players is going to be enough to save his job.