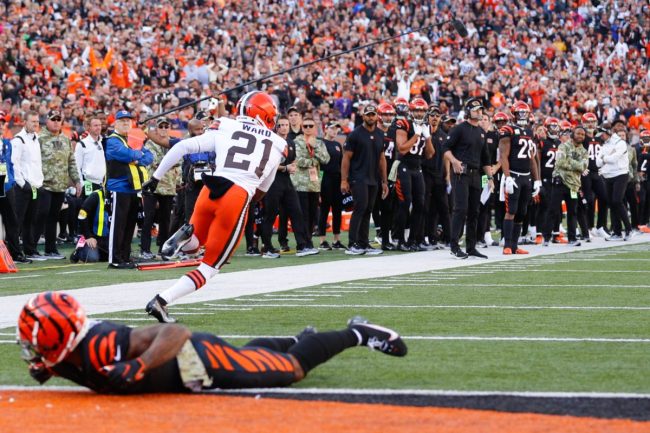 Denzel Ward and Ja’Marr Chase are getting into a little offseason back and forth. The AFC North rivals mixed it up this week, resulting in a hilarious exchange on social media.

Chase appeared on The Pivot podcast Tuesday to talk about the upcoming season. While being interviewed, the Pro Bowl wideout was asked about the defenders that he knows will bring their best every time they line up.

Not only did Chase single Ward out, but he sounded off on the entire Browns’ secondary, saying that they may not be ‘elite,’ but they talk the most trash.

Host Channing Crowder asked Chase to name his ‘Mt. Rushmore’ of DBs, to which the pass catcher responded with the following.

“I’ll give you one. Denzel Ward. I think that’s for all three of us [Tee Higgins, Tyler Boyd]. Not just because Cleveland talks the most sh-t, but because Denzel Ward did his thing. Same for Greg Newsome. I don’t think he’s elite, but they all talk crazy… When it’s game time, we’ll be seeing ’em.”

While Chase praised Ward’s play last season against the Bengals, he offered a backhanded compliment by saying the Browns like to talk trash despite not being the best of the best.

The Cleveland DB took offense, and he posted a hilarious response on social media.

He started with the clip of Chase talking about the Browns’ trash-talking secondary with an emoji signaling that he’ll use it as bulletin board material. He then flashed a clip of him picking off a pass intended for Chase in last year’s matchup, which he returned 100 yards for a score.

Cleveland beat the Browns twice last year, outscoring their division foe 62-32. Chase was held to eight catches and 75 yards in those two meetings while be kept out of the endzone.

It seems both have the matchup circled on the calendar. It should be fun to watch them duke it out on the field.