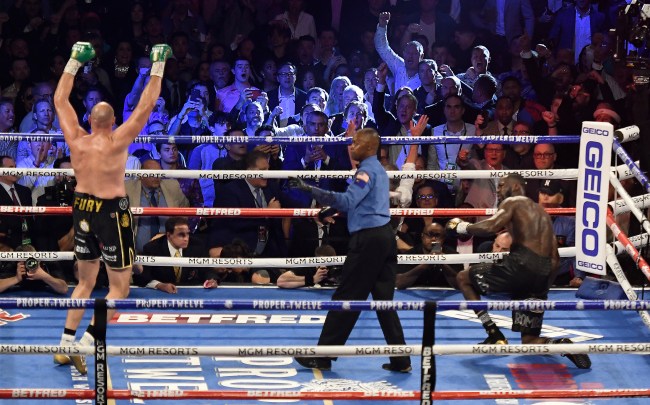 A week after losing to Tyson Fury, Deontay Wilder has officially exercised his rematch option for a third fight and the plan is for the two to fight again in July.

The plan is for the third fight between Tyson Fury and Deontay Wilder to take place July 18 at the MGM Grand Garden Arena in Las Vegas. (via @danrafaelespn) https://t.co/nqJJAdXzJv

Top Rank chairman Bob Arum, Fury’s co-promoter, told ESPN on Sunday that the plan was for the fight to take place July 18 at the MGM Grand Garden Arena in Las Vegas, the same location that hosted the rematch on Feb. 22.

“We realized that date was the favorite of both ESPN and Fox because it comes at a dead time in sports, which is good for the fight,” Arum said. “It’s after the basketball playoffs, baseball is in the middle of the season and there’s no football. It’s the ideal time. The hotel, MGM Grand, also believes it to be an ideal time.”

Arum said that contractually the fight had to be in Las Vegas, New York or Los Angeles, but that Las Vegas made the most sense for that time of year

According to Wilder he feels like Fury didn’t hurt him but that he lost the second fight because he was tired after wearing a heavy 45 pound costume into the ring immediately before the start of the fight.

He didn’t hurt me at all, but the simple fact is … that my uniform was way too heavy for me,” Wilder told Yahoo Sports by telephone. “I didn’t have no legs from the beginning of the fight. In the third round, my legs were just shot all the way through. But I’m a warrior and people know that I’m a warrior. It could easily be told that I didn’t have legs or anything. A lot of people were telling me, ‘It looked like something was wrong with you.’ Something was, but when you’re in the ring, you have to bluff a lot of things. I tried my best to do so. I knew I didn’t have the legs because of my uniform.

It’ll be interesting to see how interested fans will be to see a third fight between the two boxers considering how dominate Fury was in the second fight.