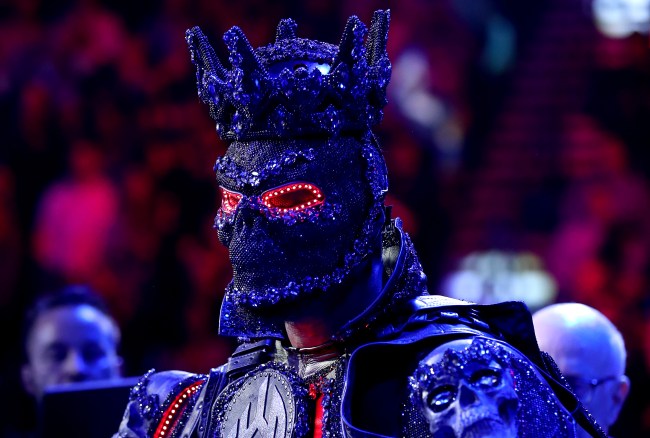 After his fight on Saturday Deontay Wilder blamed his ridiculous 45 pound costume for his loss against Tyson Fury but it appears that he’s already thinking about what he’s going to wear in the ring for the rematch this summer.

Earlier this week Wilder confirmed that he was going exercising his rematch clause to fight Fury for a third time this Summer.

Wilder adds that his legs were weakened by the 45-pound costume he wore to the ring. pic.twitter.com/ERtlWOVGuM

He didn’t hurt me at all, but the simple fact is … that my uniform was way too heavy for me,” Wilder told Yahoo Sports by telephone. “I didn’t have no legs from the beginning of the fight. In the third round, my legs were just shot all the way through. But I’m a warrior and people know that I’m a warrior. It could easily be told that I didn’t have legs or anything. A lot of people were telling me, ‘It looked like something was wrong with you.’ Something was, but when you’re in the ring, you have to bluff a lot of things. I tried my best to do so. I knew I didn’t have the legs because of my uniform.

CBS 42 in Birmingham caught up with costume designers Cosmo Lombino and Donato Crowley of Cosmo’s Glamsquad, who have worked with Wilder for years on his prefight costumes, and the boxer has already called them to discuss ideas about cstume designs for his upcoming rematch against Fury.

“Deontay Wilder called me at home last night,” Crowley said. “We had an extensive honest conversation that put confusion and rumors to rest. Reiterating that he considers us ‘family,’ Deontay was very clear that he looks forward to future collaborations. The subject of the call then turned to ‘Wilder v Fury III.’

Lombino said, “All of us consider it a privilege to contribute to the cultural and professional legacy of the iconic Deontay Wilder. As a fashion organization, I see no greater honor or responsibility that our team could be entrusted with.”

Hopefully, Wilder doesn’t use the costume excuse again if he loses to Fury again this summer.