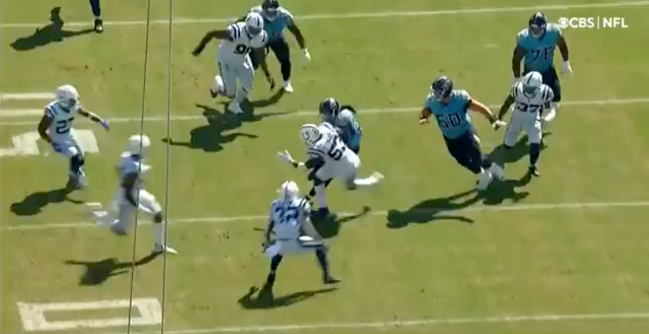 Darius Leonard stands 6-foot-2, 229 pounds, but even he is no match for the freight train that is Derrick Henry. In fact, he is the NFL rushing king’s latest victim.

After being held without a touchdown and to just 58 yards on 17 carries in a Week 1 loss to the Cardinals, everybody and their mothers questioned whether Henry can be as dominant as he has been over the last few years in 2021.

He silenced the doubt in Week 2 and popped off for 182 yards and three touchdowns on 35 attempts. Despite his impressive performance, there was not a stand-out Henry highlight from the game.

We had to wait until Week 3 for that.

During the second quarter of Tennessee’s game against Indianapolis, Henry went full Henry. He caught a screen pass from Ryan Tannehill in before the line of scrimmage and scampered through a well-blocked hole on the left side.

After gaining a first down, Henry wanted more, but he had Leonard in his path. That didn’t matter.

Henry went into beast mode and ran through him. He lowered his shoulder, engaged first contact and plowed him over.

Leonard, who had no momentum against Henry, flew three yards in the air and was buried into the ground where a part of his soul will forever rest. RIP IP.

If there was any Derrick Henry slander remaining, it will be no more. The King still reigns and his early statement piece of the season came at Leonard’s expense.