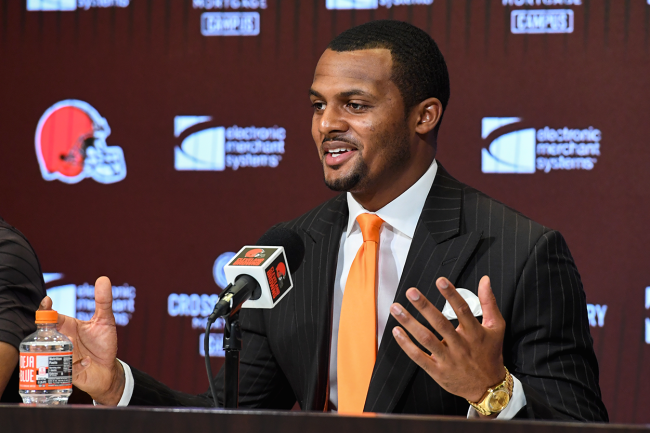 The NFL offseason has been absolutely bonkers from start to finish, but no deal made a bigger splash than the one that sent Deshaun Watson to Cleveland. After sitting on the bench for an entire season with the Texans, Watson will await a decision on his future with the Browns for 2022.

As it stands, Watson is facing 22 pending civil lawsuits for allegations stemming from massage therapists in the Houston area. He will not face any criminal charges, but the NFL could choose to suspend him for the season.

It is unclear exactly what will happen, and there is a world in which Watson does not play, just as there is one where he is the starting quarterback for Cleveland this fall. The entire thing is up in the air.

Until a decision is made one way or another, the Browns are proceeding forward as if Watson is going to play. As is Watson.

Just about two weeks after the trade was finalized, Watson posted his new jerseys to Instagram. Watson’s post showed off four Cleveland jerseys, including the throwbacks, laying on his pool table.

However, he forgot to remove one important article of clothing in the background.

Behind the pool table, atop the foosball table, sat a Falcons jersey with the number four— his number.

Before he decided to waive his no-trade clause for Cleveland, the expectation was that Watson was going to be traded to Atlanta or New Orleans. The Falcons were considered the frontrunner to land the All-Pro quarterback, seeing that he is from the area.

For Watson to include the Falcons jersey, which was presumably going to be his — because Atlanta does not have a No. 4 on the roster — was either a glaring accident, or an intentional troll. Either way — WOOPS!