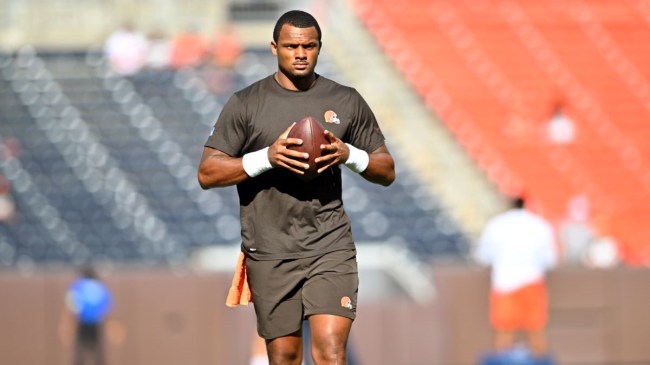 For the first time since Week 17 of the 2020 NFL season, controversial quarterback Deshaun Watson finally took to the field for the Cleveland Browns after serving an 11-game suspension for violating the NFL’s personal-conduct policy.

And not only did Watson stink out the joint on the field (12/22 for 131 yards, no touchdowns, and one interception), but he also unsurprisingly botched his postgame press conference, too.

Following his first NFL start in almost two years, the 27-year-old signal-caller was asked the remarkably easy question of whether or not he feels remorse, and even then, he still couldn’t conjure up the right response.

After Sunday’s game, he was asked by reporters if he is “able to say today that you are remorseful for the conduct that got you suspended.”

“Like I said before, that’s something that legal and clinical have answered before, and they don’t want me to address anything like that,” Watson said. “Of course, it’s a tough situation. The suspension was tough. But at the same time, my main focus was just trying to be 1-0 as a football player today.” [via ProFootballTalk]

When he was asked the question a second time — “As you returned today, did you feel remorse for the actions that got you suspended?” — Watson still couldn’t conjure up the correct words.

Watson, of course, was suspended after 26 civil lawsuits were filed against the quarterback that alleged sexual misconduct or assault.

Despite the win, the Browns are still just 5-7 and will likely miss the playoffs given how stacked the AFC is, as they currently trail the New York Jets, New England Patriots, Los Angeles Chargers, and Las Vegas Raiders for the 7th and final seed in the AFC playoffs.

While Watson’s rust is understandable in his first game back, the Browns better hope he finds his previous Pro Bowl form before the start of next season or they’ll be heading into the offseason facing a ton of difficult questions.

RELATED: Wife Of Houston Texans Owner Cal McNair Appears To Turn Her Back At Deshaun Watson During Pregame Handshakes