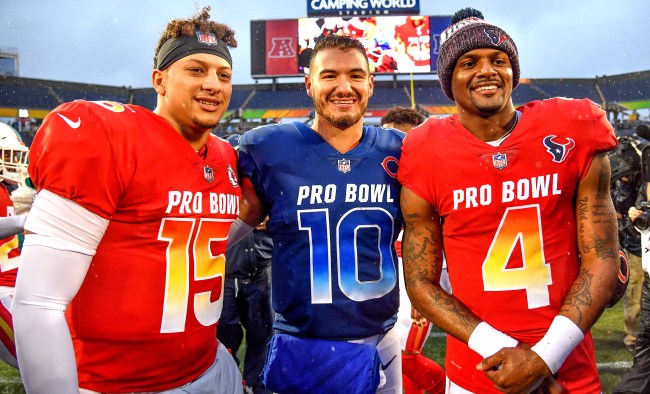 Prior to the 2017 NFL draft, Deshaun Watson said any team that drafted Mitchell Trubisky ahead of him would “have to live with the consequences” and now Bears fans are feeling it as that comment and more have resurfaced in the wake of Chicago’s offensive struggles.

“You’re gonna have to live with the consequences that come with it. That’s how I see it,” Watson said on the NFL Network in 2017. “I try to stay in my lane. I try not to take the path. I respect Mitch and what he’s done and all the hype he’s getting, but at the same time, my result speaks for itself. I feel like I’ve accomplished everything that I could. I guess if that’s who they’re gonna roll with, so be it.”

Watson was rather familiar with Trubisky’s skill set as the two played in the same conference, Watston at Clemson and Trubisky at North Carolina.

As you may recall, the Bears not only ended up taking Trubisky with the second overall pick, they also traded up to get him.

Oh, and in addition to passing on Watson, the Bears also skipped out on the chance to take another quarterback in that year’s draft – a guy named Patrick Mahomes.

Not that Trubisky wasn’t good in college, he was, throwing 30 TDs to just 6 interceptions in his final year at North Carolina, it’s just that it was the only season he was a starting QB while Watson threw for 76 TDs and ran for 21 more in his two seasons at the helm of Clemson’s offense… two seasons in which the Tigers went to back-to-back national championship games, winning one.

That Mahomes guy I mentioned, all he did in his two years as a starter at Texas Tech was throw for 9,705 yards and 77 touchdowns.

All of which has reminded the internet, and Bears fans in particular, of Watson’s comments before being the third quarterback taken in the 2017 draft.

“It’s like a slap in the face, to be honest,” Watson told ESPN’s Josina Anderson at the time.

Sometimes when I think I made a poor decision, I remember that the Bears traded pick Nos. 3, 67 and 111 and a 2018 third-round pick, to the Niners to move up ONE spot to draft Mitchell Trubisky…with Patrick Mahomes and Deshaun Watson still on the board

The Bears drafted Mitch Trubisky ahead of Deshaun Watson and Patrick Mahomes. I think about this at least once a day.

Honest question….what in the world did the Bears management see in Trubisky to justify him being picked over Deshaun Watson

The Bears really signed Mike Glennon to $16 million a year, traded up in that years draft for the #2 pick, passed up on both Deshaun Watson and Patrick Mahomes, and picked Mitch Trubisky.

Bears fans when they remember they got Mitch Trubisky instead of Patrick Mahomes or Deshaun Watson pic.twitter.com/QuPHLJlhxA