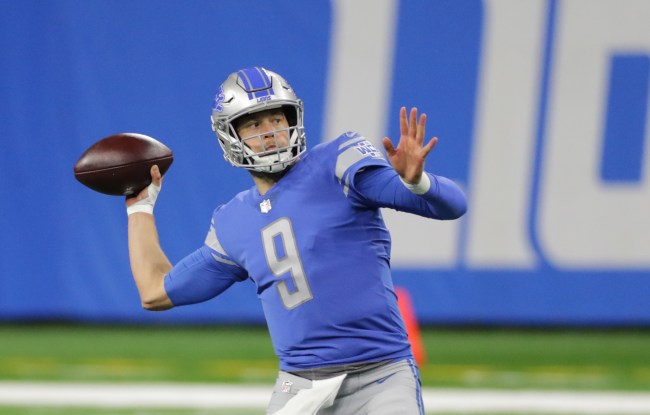 The Matthew Stafford era in Detriot appears to be coming to an end.

On Saturday afternoon NFL.com’s Tom Pelissero reported that Stafford and the Lions are “mutually parting ways” after he requested a trade from the time to get a fresh start somewhere else before Dan Campbell takes over as coach.

Sources: The #Lions and Matthew Stafford have mutually agreed to part ways this offseason and the team will begin exploring trade options in the coming weeks for their star QB.https://t.co/zT00sOGb8Q

After meetings in recent weeks in which Stafford expressed a desire for a fresh start, the Lions understood his position and plan to begin discussing trade options in the coming weeks for their star quarterback, per sources.

The sides have had open and healthy discussions since the season ended. But with the Lions starting over again, hiring Dan Campbell as head coach and Brad Holmes as general manager, Stafford told the team he feels it’s the right time to move on and team officials agreed, per sources.

The Lions are going to be in a hurry to trade Stafford before his $10 million roster bonus goes into effect in early March.

Any trade would likely happen prior to the fifth day of the 2021 league year in March, when Stafford is due a $10 million roster bonus. The Lions would carry $19 million in dead money on their salary cap in 2021, but a trade would yield a savings of $14 million in cap space and $20 million in cash at a time the NFL’s salary cap is expected to drop.

And this from Detroit: pic.twitter.com/M0L46PzCw2