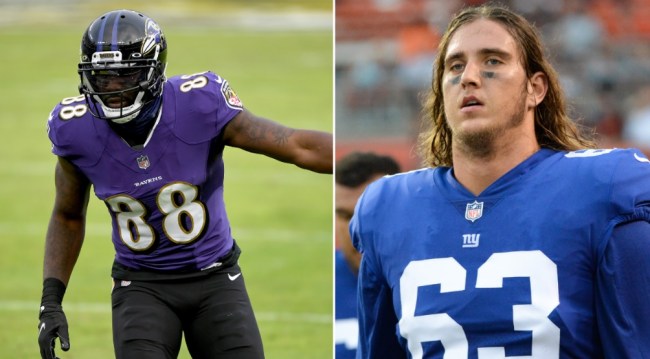 Over the weekend, Wheeler was arrested after he allegedly strangled his girlfriend until she was unconscious because she refused to bow to him.

The report said the incident began when Wheeler asked the victim to bow to him, and when she did not he grabbed her and threw her on a bed.

The report said Wheeler then strangled the victim before she lost consciousness. The report also said when she regained consciousness, Wheeler was standing near the bed and said, “Wow you’re alive?”

The victim then ran into the bathroom where she called 911 and family, according to the report. Wheeler picked the lock on the door and entered before officers arrived.

Bryant heard about the story and issued a warning towards Wheeler on Twitter.

Chad wheeler if I ever run across you
We are going toe to toe because I wouldn’t mind making the news breaking something across your fucking head then ask you are you still alive?..

He tried to make her Bow to him

You got to be fucking kidding me.. do you know how many black athletes come from traumatized environments as kids and don’t act like this.. NFL know we from that and they use it against us.. it’s a negotiating tool.. yea they can save the bi polar excuse.. https://t.co/MRZUTkTdOM