Dick Vitale Went Berserk Over An Airballed Three-Pointer That He Thought Went In, And It Might Be Time For Him To Retire 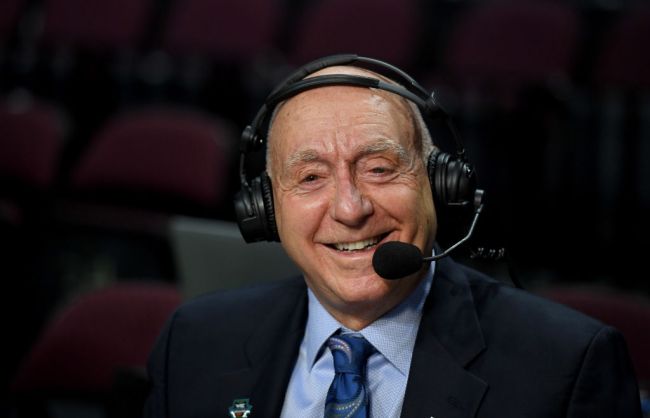 Dick Vitale is one of the greatest broadcasters to ever do it, but it might be time for the 81-year-old to think about calling it a career. While his energy on the call doesn’t go unappreciated (we love him just the same), Saturday’s Southeastern Conference semifinal showed that he doesn’t quite have his wits about him. As Tennessee and Alabama played out the final moments of a three-point game, the Volunteers brought the ball inbounds with less than ten seconds remaining and Vitale stressed the importance of the Tide playing defense against a triple.

“And now you don’t let them shoot the three,” he proclaims.

Well, Alabama let Victor Bailey Jr. shoot the three, but he airballed in front of the rim and got nothing but net… just not in the hoop. Although he missed, Vitale was under the impression that the game-tying shot went in and lost his mind, reiterating that “you don’t let him shoot the three” over and over again. Bailey Jr. missed, pretty badly, and the SEC’s regular season champion advanced to the conference tournament final.

The best part of the entire video is the clear pause from Tom Hart, Vitale’s play-by-play partner on the call. While Vitale goes berserk, Hart has to let his audience know that the shot came up short, but is overshadowed by his counterpart’s yelling. Hart lets Vitale get his excitement out before coming back to the mic with “an airball…” to clear the air. It’s incredible awkward, but Hart handled it like a pro.

Tennessee and Alabama will both be in the NCAA Tournament field — barring unforeseen circumstances (positive COVID-19 results) — and the Tide will face either LSU or Arkansas in the SEC Championship. If Vitale is on the call on Sunday, be sure to appreciate his presence while you can. Moments like this are a reminder that he can’t do this forever, and as funny as it may be, he’s doing a damn good job out there for an 81-year-old.