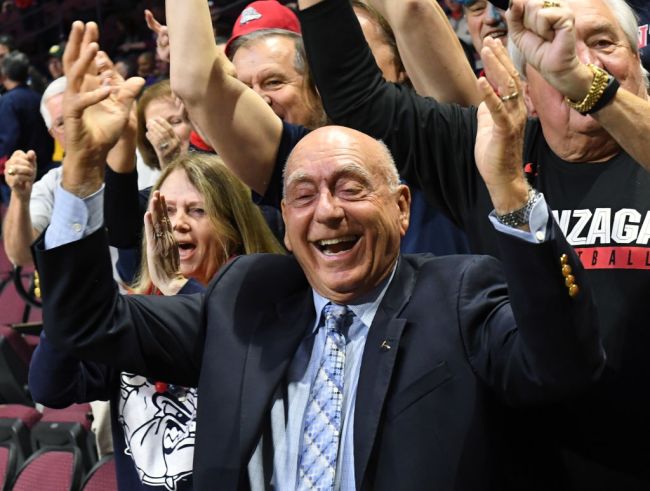 All of the pieces came together for the Buccaneers when Tom Brady signed with the team this offseason and it led them to their first Super Bowl appearance since the 2002 season. Tampa Bay will become the first team in NFL history to play in the big game on its home turf with a 31-26 win over Green Bay in the NFC Championship on Sunday, but it wasn’t without a fight. Of the Bucs faithful who were sweating it out until the end, Dick Vitale may have been the most nervous.

The 81-year-old basketball broadcaster and former head coach brought fans along with him through social media as he watched the one-possession game from his home. He began the afternoon with an instagram post of he, his wife Lorraine, and a bottle of Pepto-Bismol. Used to treat an upset stomach, nausea, heartburn and similar symptoms, Vitale was referencing that he would need to calm his nerves throughout the game.

And then came a series of similar selfies of Vitale and his indigestion aide.

Every time Rodgers & @packers get the ball I need some Pepto Bismol ! pic.twitter.com/5wnfAkCgcO

I can’t take it / my stomach is rumbling / Lorraine get me that Pepto Baby. pic.twitter.com/4WEPvPKDSx

My stomach CAN NOT TAKE IT / 8 min decides a National Football Conf . Title // SUPER BOWL pic.twitter.com/zwhFL70DfK

There is absolutely no explanation as to where this train of thought began, but if it ends up being an advertising campaign, it’s brilliant. If it doesn’t, it’s even better. In between his pink-drink (which he seemed to actually be consuming) photography session, Vitale fired off a bunch of in-game moment-related tweets that included many of his classic catchphrases. It was a pure stream of consciousness and it really couldn’t have been any better or less coherent.

That is @_fournette of Old baby / rambling & spinning down the field for TD @Buccaneers 14- @packers 7 !

OMG I must get Tix baby @TomBrady the GOAT / 1st time a team in the Super Bowl is playing at home #awesomebaby It is unreal VBDI SAID BUCS:34-27

The celebration was on when the clock hit zero. Vitale pulled out his Bucs flag and danced around the TV in jubilation.

No matter where you stand, how can you not be happy for Dickie V?!